HoneyDEWWEY: A Boba Remix
by ENYAWREKLAW View Mix
Recipe hosted at All The Flavors 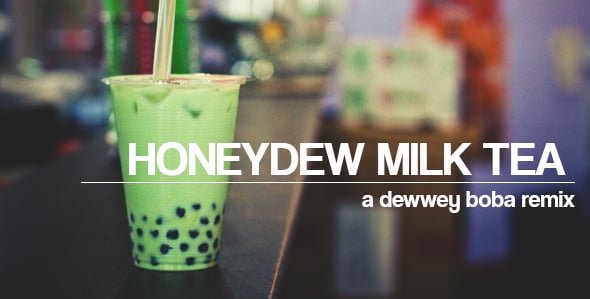 Sweet, pleasant, Honeydew with a touch of Cantaloupe and a splash of cream

TFA Honeydew 3%: This is the main profile of Dewwey Boba. Upon vaping it for the first time I immediately connected the two together. It's just too unique a flavor profile to forget, and with Dewwey being mainly just a Honeydew flavor, it was easy to connect the two. At 3% you get a nice, sweet, and pleasant Honeydew flavor that really makes for a spring time/summer time vape. I'm really addicted to this stuff, perhaps because I'm half Thai and I love me some damn Honeydew

CAP Cantaloupe 3%: This is what gives the TFA Honeydew that interesting melon like flavor. It just adds some more sweetness, and not a strong astringent sweetness, but a pleasant one. And it also adds another dimension and layer to the Honeydew. Honeydew by itself is kind of boring and linear, and what the cantaloupe does is add some depth in the front. Again, all you need is 3% to compliment that Honeydew

FA Whipped Cream 2%: FA Whipped Cream gives the mix that nice fluffy cream flavor that comes with Dewwey. It doesn't add too much weight, it doesn't add too much flavor, although it does give the mix that "milk tea" quality. It was difficult landing on this flavor because I was thinking that a heavier cream was needed. But after much deliberation I found the recipe works better with just a light dairy note in the back. A slight difference from the original.

TFA Vanilla Bean Ice Cream 2% (if no FA Whipped Cream): This is for those who can't get access to FA Whipped Cream. This version is a much creamier and thicker recipe that seems closer to the original, but in my opinion isn't as good as the light and fluffy Whipped Cream version. This batch was the second in line so feel free to sub if you want a thicker more creamy recipe, or you can't access FA Whip

TFA Circus Cotton Candy 2%: You could sub for regular cotton candy or EM here, but I wanted to use something with a little bit more candy flavoring to it. The original has this almost bubblegum like candiness to it, and that's why I settled on Circus Cotton Candy rather than just adding EM.

(Optional) Sucralose 1%: If you want to go really authentic, then you're going to need to add some Sucralose. I'm sick of this stuff and created this recipe without it, trying to get as close as I could. But if you want to hit the nail on the head, you'll need to add this coil crushing ingredient to give you that fuckin "sugar lips" that cries to me about. Trust me, it's damn good without it though.