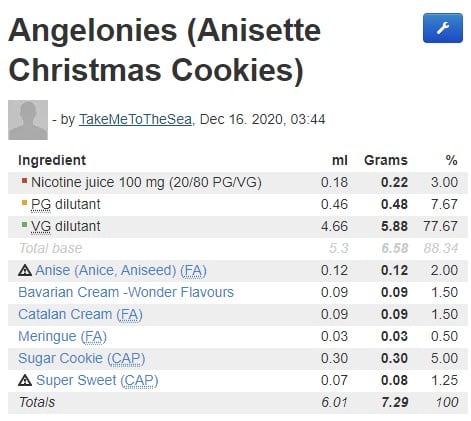 The winner of the first episode of Midweek Critique season 2 is Takemetothesea with her Angelonies recipes. This is a simple Anisette Cookies recipe that takes this light, buttery, floury cookie and infuses it with a touch of Anise, citrus, and a sweet icing. This is a really delicate and delicious profile that brings your quintessential CAP Sugar Cookie + Meringue bakery flavor, but adds a bit of depth from the deep Anise that’s added. The use of Catalan cream also adds a touch of citrus to the mix, albeit light. While I really enjoyed this flavor profile, and found it very pleasing to vape, I did find the Anise to be a bit too heavy on the bottom or finish. It seems to distract from the light flaky bakery underneath, which is more delicate than Takemetothesea might have otherwise thought. Nonetheless, it was the best of the week, and I can’t wait to see how its tweaked.

This is a nice melon glazed donut. The kind you like even in summertime since the melon juice in the glazing plays well together with the vanilla custard.

Cookie and Zeppola form the backbone of the recipe. This is the type of donut Grandma made. She carefully enhanced it with some homemade custard. CAP‘s vanilla custard plays it’s strength in providing a nice non dominant moisture to the donut while being nicely present in the background.

Cantaloupe plays generally well with Meringue and provides here the glazing for the donut. CAP Cantaloupe has a nice sweetness in the flavor profile which supports that function very well. If you only want a slight hint of cantaloupe in the glazing you can reduce the percentage to 4%. At 5% the cantaloupe is more dominant while still letting you taste the donut.

In the new season of Midweek Critique, I want to include more popular recipes even if they weren’t submitted to the show. SteveTC’s Melon Glazed Donut is just that. The profile is simple, it’s a FA Zeppola donut type recipe, with an infusion of Cantaloupe melon in the “glaze”. This caught my eye from just the profile itself, but also the rave review it’s received on ATF. After vaping, I can say it’s definitely accurate. It’s hard to deny how well FA Zeppola creates a donut, and when paired with the right creams, like in this recipe, it really just enhances that flavor. What is odd about this recipe is the choice of going with melon as the glaze. I’ve never personally had a melon donut. To me it sounds similar to Chocolate Watermelon. That said, I still kind of feel that way after vaping it. I don’t really think the two profiles match up particularly well. The vape isn’t bad, there are no off-notes, and the donut is very nice. But I’m just not a fan of the profile itself. So if you’re looking for a Melon Donut, for whatever reason, this is a good rendition of that. 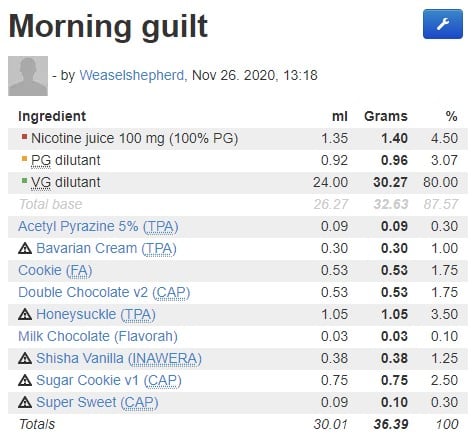 Where do I begin with this? First off, it needs to be said this is a mixer who’s only been mixing for two weeks upon making this recipe. So that needs to be kept in mind. Nonetheless, this recipe tastes about as bad as the recipe looks. First off we have the profile of Double Chocolate Cookie dipped in honeysuckle milk. Another “Chocolate Watermelon” scenario, but possibly even worse. I’m not sure why WS decided these two profiles would work together – but they seem to enjoy it considering this is their ADV. The flavor I get is this rich, slightly chalky chocolate bakery infused with earth off-notes and then finished with the combination of dirt and honeysuckle florality. A real disaster. I’m not sure why there is Acetyl Pyrazine in this recipe. I’m not sure why only 0.1% of Milk Chocolate. Overall, it’s just a great example of mixers who love to experiment with their flavorings when they first learn the trade. We all go through that phase. It’s just funny this person decided to release and submit a recipe while in that phase. I will say though, as bad as it is, I really do appreciate the effort. I’d be singing a MUCH different tune if this was actually pulled off in a semi-palatable manner. So WS, keep taking risks, because this is infinitely better than any boring fruit blend we saw 10000 of in 2020.

Make sure to tune into Midweek Critique LIVE every Wednesday at 5pm EST / 2pm PST on Youtube and Twitch. And if you want to send your recipe in for review, make sure to watch on Twitch and use the DIYorDIE streaming store to get your Critique Recipe badge!