This recipe is inspired by my very own Obsidian, which is a cookie dough RY4 mix. Falcon previously submitted a similar recipe, where my critique was to focus on either the bakery or the tobacco. He took the critique, and made two different recipes – where Fool’s Gold follows the more bakery path. This mix is really nice! I pick up a deeper, more baked and caramelized cookie flavor, with a light RY4 finish. One of the most impressive things about the recipe is the use of the MB Cookie Bite. This not only adds a touch of chocolate to the mix, but also helps lift the RY4. Something I want to try in my own Obsidian recipe. Overall, I really enjoy this mix. My only fault is that it’s a bit muddled, and adding a bit of separation could go a long way.

DFR makes his appearance on Midweek again. This time with a fruit blend that was inspired by the popular Pachamama. This takes notes from apple, strawberry, guava, dragonfruit, and tangerine, and blends them all together. Unfortunately, because the recipe doesn’t have a defined goal, it ends up a bit muddled and messy. The flavor is nice and pleasant, with a juicy strawberry body and a tropical guava/tangerine finish. But nothing impresses. Giving the recipe some much needed clarity would help out a lot, either by removing some flavor profiles, or honing in on others. For a tropical mix it’s nice, but easily forgettable. 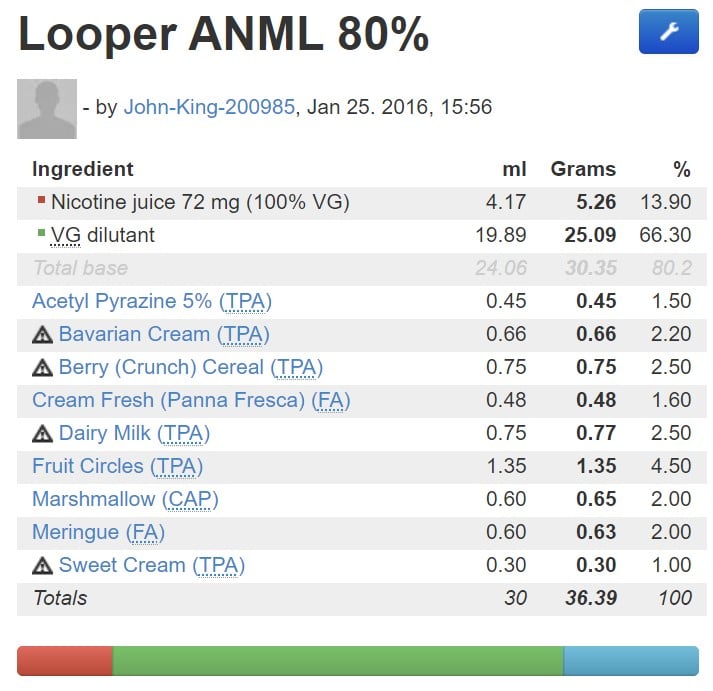 One of the first “random” recipes I’ve chosen for the show. This recipe is meant to emulate the extremely successful Looper by ANML which  is your run of the mill “fruity pebbles but also lemon/lime crispy” cereal that dominated the early 2016’s. John takes TFA Fruit Circle and Berry Crunch and pits it up against a large backdrop of creams like TFA Dairy, TFA Sweet Cream, and FA Meringue. But it doesn’t quite live up to the original. This mix just seems to be a bit too light, losing a lot of what makes Looper “Looper”. I think the creams need some more work, since they seem to mute and dominate the mix. But it could get the job done if you’re looking for something vaguely similar. Overall, it’s OK.

Make sure to tune into Midweek Critique LIVE every Wednesday at 5pm EST / 2pm PST on Youtube and Twitch. And if you want to send your recipe in for review, make sure to watch on Twitch and use the DIYorDIE streaming store to get your Critique Recipe badge!