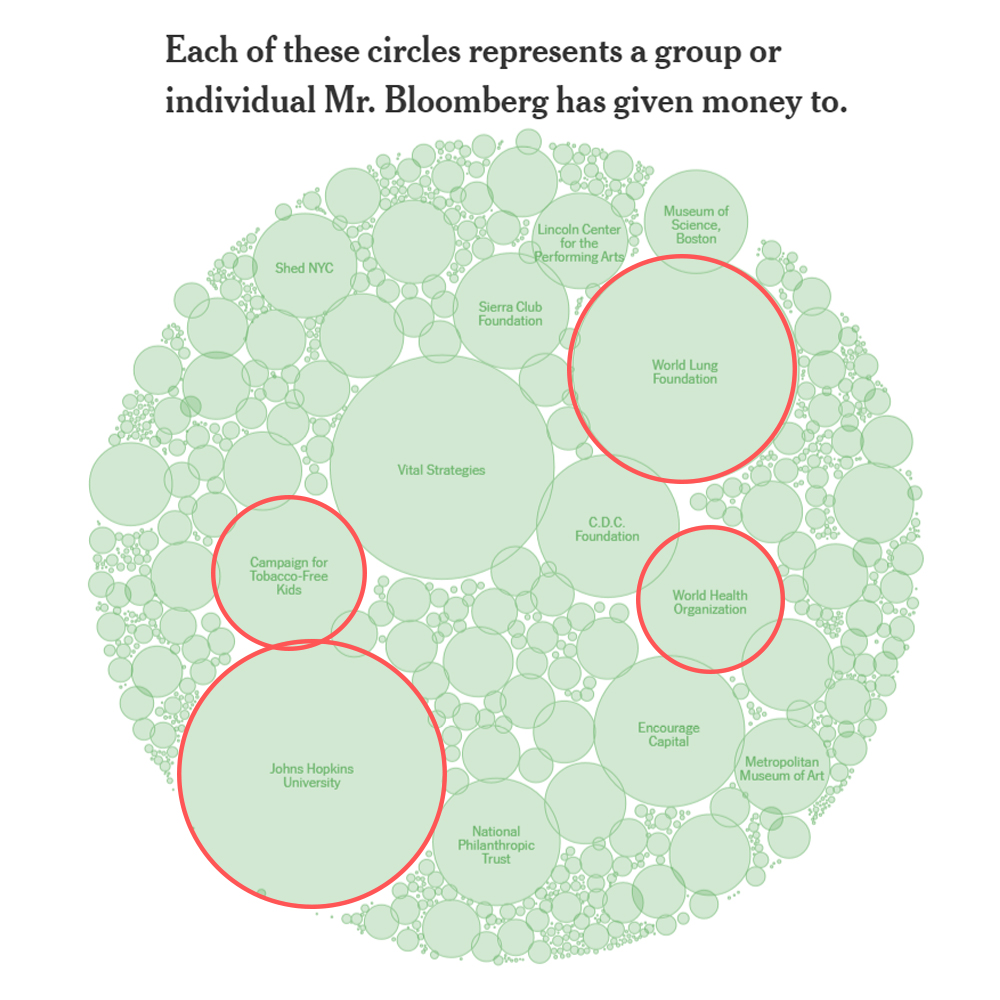 The image above was taken from this NY Times article “Bloomberg’s Billions: How the Candidate Built an Empire of Influence” written by Alexander Burns & Nicholas Kulish. The article details just how vast Mike Bloomberg’s money, and ultimately is his influence, reaches. It opens the article referring to his donation to Emily’s List, and his disparaging comments of the #MeToo movement. Emily’s List officials thought about removing his invitation to a luncheon, but found it too risky to lose Bloomberg’s monetary flow. Morals and ethics were pushed aside in one of the nation’s strongest movements, all for money.

It’s hard to imagine, but Bloomberg’s influence on not just healthcare, but health advocates, have caused the vaping industry immense troubles. So much so, he could be named as vaping’s biggest enemy. What is the reason? Why is Bloomberg targeting vaping with such fervor? This will be discussed at a later time. For now, I wanted to highlight just how much his money has made an influence on vaping, and the image of Tobacco Harm Reduction.

I outlined some of his biggest donors in red, all of which have to do with the recent drama facing vaping. First is Johns Hopkins. The prestigious medical school gets pumped with grant after grant from Bloomberg. In 2018, Bloomberg “donated” $1.8 Billion dollars to the school. This is the same university that released the debunked “Toxic Metals” study, which has already made its rounds in the media. Bloomberg embedding himself into the very fabric of one of the nations most sought after schools, is something that doesn’t bode well for future studies coming from this university.

Next is the historied Campaign for Tobacco Free Kids. Bloomberg is no stranger to the Matt Myers camp, funneling tons of money into this program to persuade state governments around the nation to come to their terms on tobacco policy. The group, which started in 1995, solely operates on funding from Bloomberg as well as Master Settlement Funds. In order for them to survive, they need two things. Tobacco to survive, and a new boogeyman as tobacco use dwindles. Vaping of course in their crosshairs. Remember, all CFTK does is lobby the state. They offer no actual policy, and only seek to ban.

Of course, there are donations to the WHO. This group has recently been criticized for their misleading statements on vaping. This, among other things, just portrays a clear bias the WHO has against vaping. 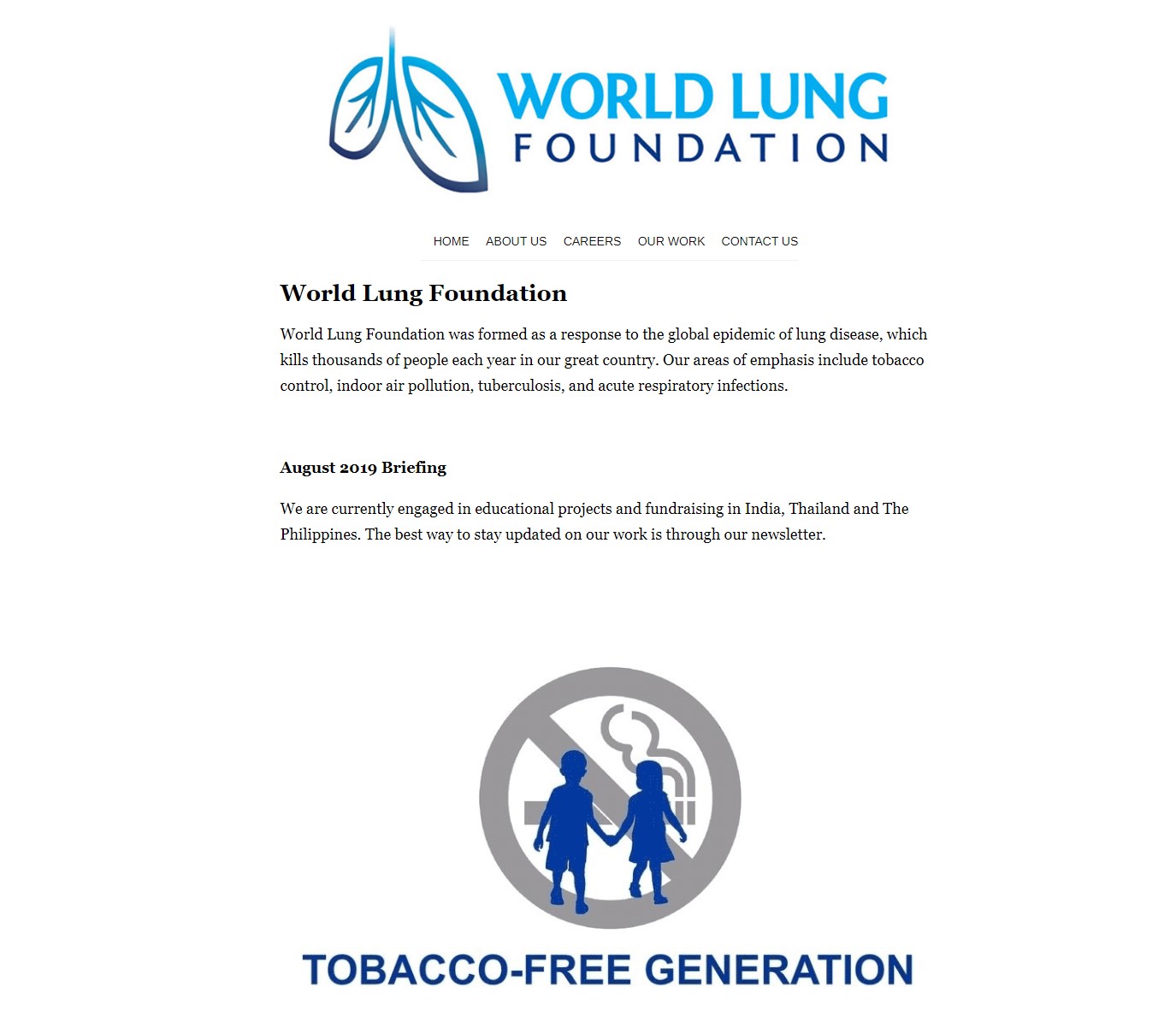 This is the website to an organization which received almost the same amount of money as John Hopkins. Almost completely barren.

But the second biggest donation on the list, the one that makes me very concerned, is the donation to the “World Lung Foundation”. I tried my best to find out what exactly this group does. Their website doesn’t do a good job of this, since it’s almost completely stock. I haven’t been able to find much about this group. But on their site they displayed their “education campaign” on tobacco use, in Thailand, Philippines, and India. It just so happens to be that all three of these companies have completely BANNED vaping outright. While this may be a coincidence, it’s something I want to further dive into. This is very concerning, and if WLF has anything to do with the banning of vaping in these countries, it was almost directly related to Bloomberg. Meaning, Bloomberg has eliminated the best chance at minimizing harm from tobacco, in some of the worlds “smokiest” countries.

There of course is the CDC, which Bloomberg has donated to. It’s not highlighted because I didn’t find it necessary. We see the complete inepitude from this organization, along with their clear bias. Though, it is one more connection to the misinformation campaign vaping has seen, and the recent Bloomberg donations.

As you can see, if there is one man dedicated to eliminating vaping from this planet, it’s Bloomberg. A man with unlimited finances, extreme reach globally, and a man who may hold the office of the strongest nation of the world. Vaping has found its enemy, and the community needs to do everything in its power to ensure Bloomberg isn’t able to pay his way into banning this important technology.