We’ve all had it happen to us. We pick out all the flavorings we enjoy, some of which we used many, many times before. We sit at our mixing station, get out the scale, breakout the calc, and start pouring in our ingredients. Then we shake it, let it sit a day or so, and start ripping. Everything seems great, except…something. There’s this odd flavor coming from our new recipe. It’s not a flavor we can blame on any of the ingredients, mainly because we haven’t tasted this note before. And we can’t pinpoint where, or why, it’s popping up. This is what we call an off-note, and unfortunately, they’re not just restricted to recipes. They come in many forms, and can ruin a mix. Sometimes, they may even help out a mix, or add something new and intriguing. But the main point, is that the off-note is a flavor we weren’t expecting, or wasn’t expected.

The most common off-notes come in the form of flavorings. They are just oddities that some flavorings contain. For example, TFA Brown Sugar, used a bit too high, can produce an astringent, almost medicinal, off-note. Or FA Nut Mix can provide a burnt nut-like off-note. There are so many off-notes that are present, inherently, in flavorings. So when this happens, what you need to do is identify those off-notes, and work in other flavorings to either hide, or accentuate, those off-notes. Some flavor off-notes are much more present than others. I find the medicinal-chemical off-notes from FE Lemon, completely ruin any positives in the flavoring. Where the pine-sol off note of TFA Fruit Circles is something I can get past. Another issue is that some people pick up off-notes from certain flavorings, that others can’t. The most ubiquitous is the black pepper off-note many get from TFA Vanilla Bean Ice Cream. I personally, don’t pick up that off-note whatsoever, so this adds another level of subjectivity to the issue. But, off-notes are a fact of mixing. You will encounter them. What makes a great mixer is how well they can manage them. 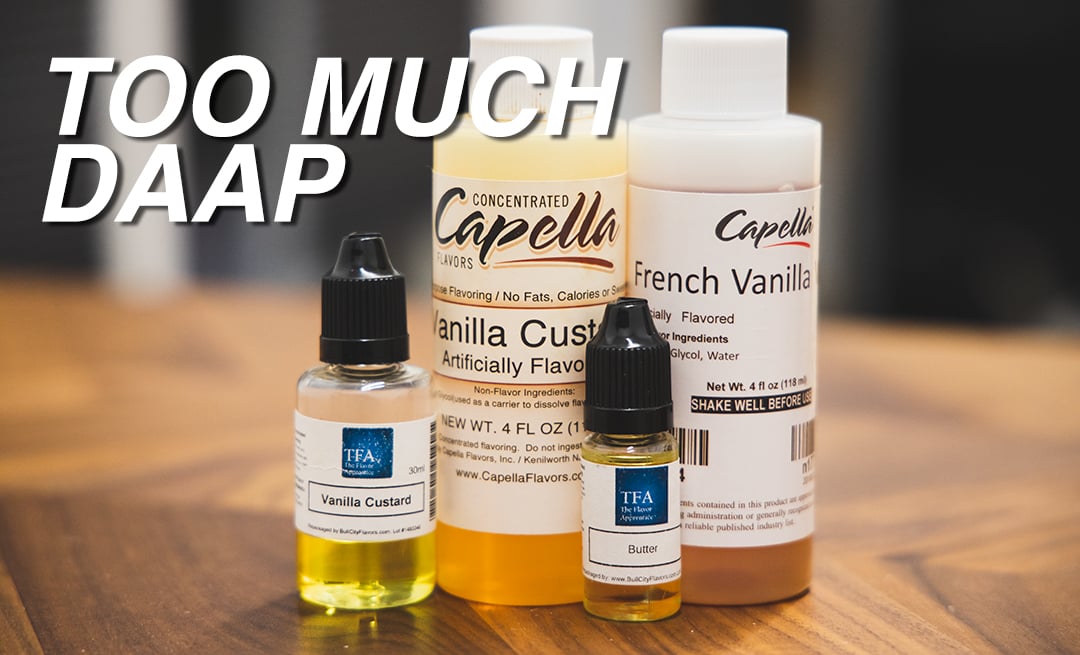 The other type of off-note comes from mixed flavorings, or complete recipes. These are the most frustrating, because sometimes they’re very difficult to identify, making them even more difficult to work around. I think the only way to effectively find these off-notes, is just through experience. The more you mix, and the more pairings you work with, the more you’ll understand where certain off-notes can come up. One of the easiest recipe off-notes to find, is simply through over-flavoring. An example would be a recipe such as

Now with this recipe, there’s an abundance of Diacetyl and Acetyl Propionyl. To me, I pick up a very oily and greasy off-note from over-flavoring with DAAP. A simple resolution would be be just reducing the amount of DAAP included in the mix. So I would either remove some of the flavorings, or work in substitutes. While it might completely rework the flavor of the mix, it will – to me – make the mix much more palatable. So this is part of the consequences of mixing. Other recipe off-notes can include “clashing” off-notes. This is simply where two flavorings, when paired, just clash with each other. Something like

Because those two flavorings are incompatible, they create an odd note that isn’t appealing. While this is more easy to identify, it can become very difficult to work around. If I’m working on a Chocolate Watermelon (something I don’t recommend anyone do), well then I don’t have many options, and this may limit my choices, thus, restricting flavor output. Overall though, as long as you remain attentive when mixing, you shouldn’t have too much of an issue with off-notes. Just be sure to really dive deep in your testing, and keeping your palate “open” to try and pick up those weird flavors. I can’t tell you the amount of recipes I’ve tried where the mixer is aware of these off-notes, but instead of working with them, they choose to ignore them. This to me, is a lack of refinement. So stay aware, and you should be just fine, especially now you know how to identify and spot those tricky off-notes.