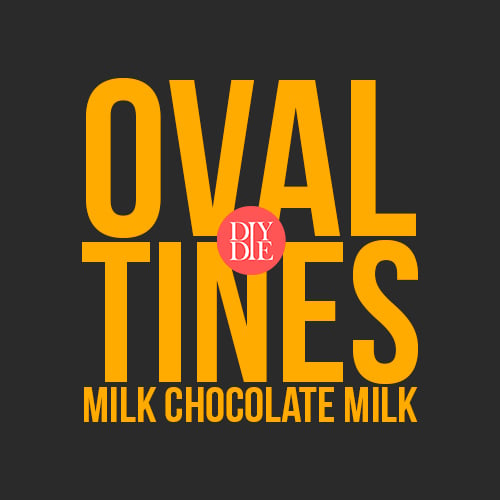 A creamy and rich milk chocolate recipe.
Sweetener is not necessary, but makes for a much more authentic experience.

Head to:
https://diyordievaping.com/2018/11/29/oval-tines-milk-chocolate-diy-ejuice-recipe/
for the full notes

I know, I know. A lot of you are writing right now in the comments on how I missed this flavoring for so long, especially after my great chocolate hunt of last year. You're all telling me down below on how you told me dozens of times this was the end-all-be-all of chocolate flavorings. And you're right! I'm late to the party on HS Australian Chocolate. And to be honest, I don't really know what took me so long to get some in. I want to say it might've been because it is a flavoring that can be difficult to get at times. But that's never stopped me in the past. Maybe it was because HS is often an overlooked flavor company. Even though they carry some absolute BANGERS, such as their Blueberry which is the best in the business, and their French Vanilla Ice Cream which is absolute heaven. Well they did the same with their Australian Chocolate, which is a terrible name for this ingredient, mainly because to me, it's Chocolate Syrup. And as soon as I mixed up my first tester, I knew it was the missing ingredient in my hunt for the magical "Golden Ticket" Chocolate. This entire recipe is based on the absolutely delightful flavor from this ingredient. It doesn't quite pack enough milk or dairy flavor, but that's the easiest of remedies.

So HS Australian Chocolate, much like a lot of the other chocolates on the market, can get "chalky" or dry. I've found that throwing huge amounts of DAAP at chocolates, along with Ethyl Maltol and Sucralose, helps tremendously at giving it a more fatty and authentic experience. That's where FW Yogurt comes in. To me, FW Yogurt is a heavy and rich cream filled with DAAP, but without any of the greasiness you can get from Custards. It's the perfect accompanying flavor to HS Australian Chocolate to create a Milk Chocolate flavor. And you might think the concentration is a bit high, but even after a shake, it's excellent. After a few days, when the yogurt fully blooms, it becomes even more luscious.

This ingredient is used to just add some fluffiness to the back end of the vape. That's usually the best way to use marshmallow as an accent. But since we're also dealing with Chocolate, it helps bring down any off-notes that might arise. Is it a necessary ingredient in the recipe? Probably not. But its a great safeguard and helps give a bit more sweetness. Feel free to leave it out, or sub for TFA Marshmallow. It won't make too much of a difference.

I normally don't note sweeteners in recipes. They are, for the most part, optional. But I will say - in this recipe, it helps out tremendously. Milk Chocolate bars are often very sweet. They aren't sweet in the sense you'd find a fruit sweet, but sweet on the tooth. That's exactly how it works in the recipe. It gives the chocolate much more presence and flavor, while not being cloying or sharp in any way. Leave it out if you want, just know it's much better with it in.

If you enjoyed this recipe, feel free to share it with your friends and family using the links below. You can also check out more recipes here. And be sure to follow me right here on diyordievaping.com, YouTube, as well as instagram.