If you’ve never interacted with the UK vape industry you might not necessarily understand the intricacies of what’s going on. For instance, they have a very interesting set of regulations on the industry known as the TPD or the Tobacco Products Directive. This puts down specific rules that the vaping industry need to abide by. While those in the UK might see them as restrictive, when compared to the US regulatory landscape, it’s a fucking Godsend. But that said, it still is a set of restrictions that come with their own obstacles the industry has to work around.

One of the biggest, and most restrictive rules the TPD enforces, is that vape juice can only be sold in 10ml bottles. As someone who vapes quite regularly, but wouldn’t be known as a “hardcore” Vaper, 10ml’s is very easy to get through. What doesn’t make much sense with that rule, is that you can purchase as much vape juice as you want, as long as it’s in 10ml bottles each. So if you wanted to purchase 100ml’s of a juice, you’d need to purchase 10, 10ml’s. Silly, I know.

But there is a new work around that has taken Vape Jam UK by storm, and that’s the “short fill”. Essentially, this is 0mg, “unfinished” e-liquid, that can be sold in any amount, with a small amount of liquid missing, that is meant to be filled later. This is then “filled” by THE CONSUMER (very important), where they top off the remaining e-liquid with a specified amount of nicotine-base. So to just break this down, I went to a shop recently and purchased a 100ml bottle of a 0mg e-liquid. There was about 20ml’s missing from the bottle. Once I purchased that e-liquid, the shop owner also gave me two small 10ml bottles filled with 50vg/50pg unflavored 18mg nicotine base. I was then told “that I could pour those entire bottles into my e-liquid in order to reach the target 3mg of nic”. In which I did, gave it a good shake, and I was set. 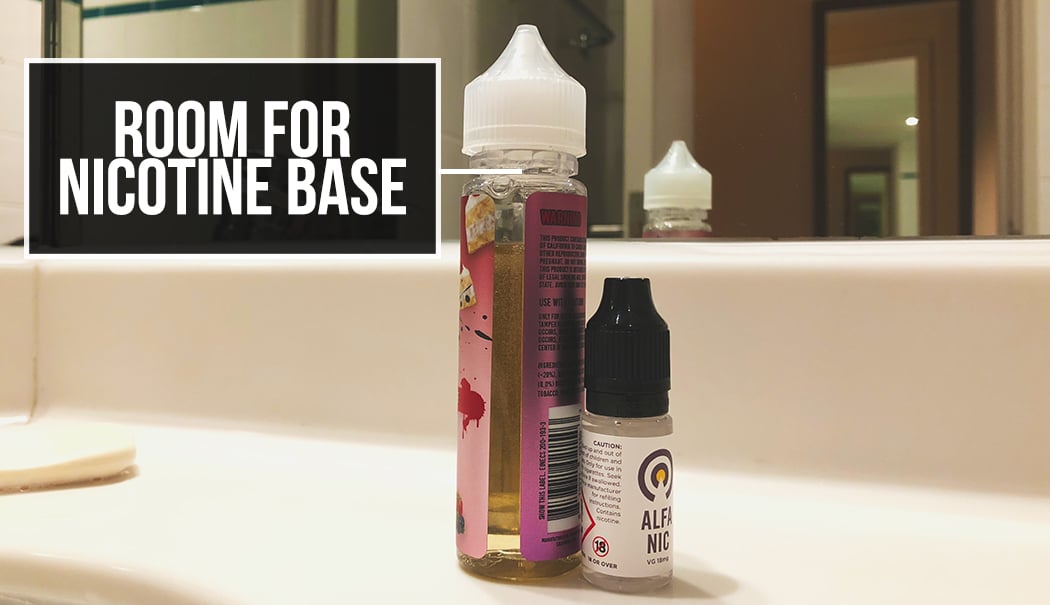 These types of weird work-arounds always appear when regulators enact rules on an industry they know nothing about and I love when I see markets react with hilarious ingenuity. Now instead of selling packs of 10ml’s, companies are selling “short fills” and they’re everywhere. Speaking to the shop owner of “The Great British Vape Shop”, he explained to me that when short-fills were first introduced, they weren’t quite right. These nicotine bases would dilute the flavor of the e-liquids, because these e-liquids weren’t made with adding extra base in mind. Thus diluting the flavor of the entire solution down, just enough to create a softer, lighter, vape. Unsatisfactory, especially when you consider that many vape large airflow tanks that already take a huge bite out of the flavor. This has since changed, and e-liquid developers everywhere have reformulated many of their juices to specifically work best in a short fill scenario. He also explained that he didn’t think the short-fill market is a solution to the TPD. Many worry that the TPD will be tweaked further to cover this loophole in the future, thus creating a new way to sell these same products.

One-Shots also are proving to be more and more popular now. What I personally enjoy about this short-fill market, is that it sort of introduces many consumers to DIY mixing. It’s essentially the perfect bridge to getting people to mixing their own flavorings. Just the act of pouring a bottle of something into another, is enough to get them used to the fact of pouring flavorings into a bottle, and then their base. One-shots being DIYORDIE’s bread-and-butter, this makes me happy for the future of concentrates and hopefully can help increase further sales, as well as engagement within the DIY community.