I review the entire FA Pazzo Line in the video above. I received the Pazzo line from EcigExpress.com and NOT from FlavourArt themselves. I was not asked to review these products, but I felt people would be interested in my thoughts about them. I was pleasantly surprised. These are some great one-shots.

Joker is supposed to taste like a Cannoli. Upon mixing it, it smells absolutely delicious. Not only do you get the aroma of a flaky, powdered sugared, cannoli shell, but also a touch of the cream in the nose as well. Unfortunately, after mixing it, the flavor isn’t as accurate. The flavor is more in line with CAP Glazed Doughnut, or TFA Frosted Donut. There’s a bit of that “playdough” aroma that sometimes can leave people running for the hills. I don’t really get that with FA Joker too much, and in fact, I think the flavor is great. It’s layered and balanced well, you can taste the flaky buttery shell, and also a bit of the powdered sugar, but the cream is lacking. As for accuracy, it misses the mark. As for taste, I enjoy it. 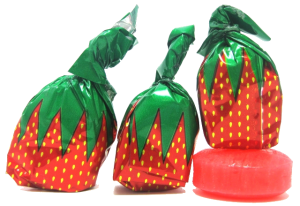 This is by far my favorite of the bunch. They tried to emulate the flavor of these strawberry candies, with the chewy middle center. And in my opinion, its spot on. The flavor is so close to the chewy center of those candies. It’s bright, it’s vivid, and full of saturated flavor.I’m extremely impressed with this and can’t wait to see how it mixes.

This is my LEAST favorite of the bunch. While I’m not quite sure exactly what they were trying to go for (on the packaging is a cranberry danish crumble and a glass of pink lemonade?) what I taste is mostly Bubblegum. I’ve also heard of people who taste nothing but medicinal cherry notes with it. Nonetheless, it’s easily the worst of the bunch. I think if you aren’t as sensitive to the cherry, like me, you might have a useful bubblegum ingredient. Other than that, skip it.

King is a Blackcurrant Chewy Candy with a sprinkle of white sugar. And it tastes as such. It’s pretty damn good. If you’ve used FA Blackcurrant before, you’ll find it’s the exact same flavor profile of it. But I also taste a bit of licorice. Not offensively, and not enough to call “anise”, but there’s a certain type of “chew” to the recipe that intrigues me. it’s a great pick up for those who LOVE FA Blackcurrant, which I know many do.

Finally, my second favorite, next to Jack. Ace is a tropical medley, but what it mainly is, is a Papaya recipe with other tropical fruits thrown in. Papaya is normally quite funky and earthy, but not this recipe. Because they blended in pineapple, coconut, and most notably, mango, it creates a sweet, delicious, yet wildly complex, papaya recipe that I love. Excellent work.