So Clayton was so kind to review a product that was recently sent to him by Elixir Vape called Alterna. If you've listened to the latest InTheMix Podcast with Smoky Blue, you would've heard all about Alterna. She explained this was a nicotine "alternative" and that it was helping curb her cravings to traditional nicotine (also who is an affiliate with the company). Furthermore, that it was an all-natural blend of herbs & compounds carefully chosen by a team of chemists out in California. On the bottle it notes that any statements Elixir claims are not approved by the FDA, and as it stands, no evidence or proof of effects other than testimonials from various affiliates. So their own statements about offsetting nicotine withdrawal, boosts of energy, or support for detox, stress, and appetite, have no basis in pure scientific fact. Likewise, you shouldn't use if pregnant, nursing, or allergic to any ingredient (what ever that means), and that you should consult your physician before use. We're off to a good start. The main herbs used in this product are Green Tea, Yerba Mate, Ginseng, Valerian, St. Johns Wort, Eucalyptus, Peppermint, and Kava. All of which, according to their MSDS, are proprietary blends - MSDS and COA are below. Anyone who's been into a GNC will have seen these herbs, even in similar blends, on the shelfs as teas, tinctures, or supplements. Now, these herbs will give you some type of effect if consumed in recommend portions. I'm not disputing those claims one bit. But those effects vary from person to person, and are minimal to say the least. 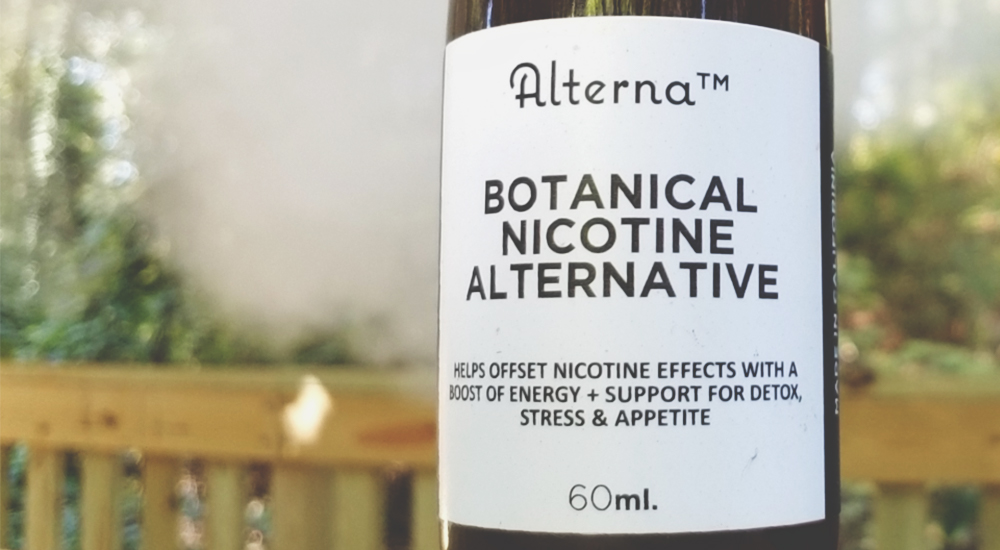 Now I was skeptical from the beginning. But after seeing accounts of how the owner, William Vern 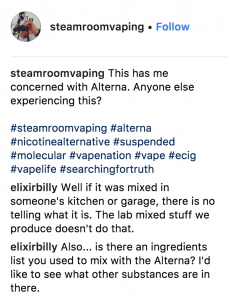 etti (ElixirBilly in the images below), treats those who have had their own opinions and concerns for his product, I then started to see the product for what it is. Snake Oil. In the video above, Clayton does a great job of explaining his issues with many of the claims Elixir is making. One being safety. There's not much known about inhalation of these compounds. Their own MSDS explains to "remove to fresh air" if inhaled, but that is more an insurance policy than it is a report. Many flavorings we use contain that same warning. What's worrying is the large particles seen within the mixed Alterna e-liquid that a few users pointed out, that is much more invasive than concentrated aroma. That doesn't sit too well, does it? Well there's more.

On Clayton's next point, he describes a cloudy "mold-like substance" that formed almost every time he mixed with this product, that would subside into a watery-cloudy viscosity. He's not the only user to experience this. Now, here's where it gets good. Clayton made an Instagram post about this phenomenon showing off this foreign substance in his e-liquid. William decided to chime in. Instead of maybe recognizing a fault in either his product, in maybe the packaging or preparation, or in the process of production from Clayton, he basically decided to push all blame onto Clayton. Saying things like "Well if it was mixed in someones kitchen or

garage, there is no telling what it is", "...is there an ingredients list you used to mix with the Alterna? I'd like to see what other substances are in there", and my favorite "I mean it could be METH for all we know" with complete knowledge of Clayton's past drug addiction issues. 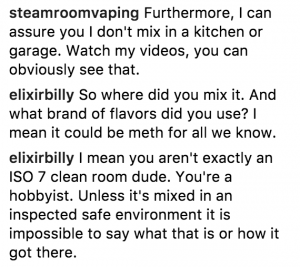 Now, I can understand where William is coming from. Your product is being used in a place that isn't 100% controllable and you don't want to take the blame for something there is no proof of. But, how William approached the criticisms and concerns with vitriol and negativity, it's easy to see he is VERY insecure about his own product. A simple "We're sorry, but we've never seen that happen. Let's figure out what could be causing this" would of sufficed. Not lamenting on someones past transgressions as causation. Completely uncalled for, unprofessional, and honestly...a bit alarming.

Now on to the final point. Does the product actually work? Does it do what it is intended to do? In Clayton's case, it did the opposite. Not only did it not work at effectively removing any negative effects of nicotine abstinence, but it also caused him other health issues. Because Clayton is currently taking medication, Alterna actually interfered and started to give him mood swings, queasiness, as well as put him in a "constant state of unrest." Typical signs of Serotonin Syndrome. Anyone prescribed to anti-depressants SHOULD NEVER use Alterna, or St. Johns Wort and Kava for that matter. Maybe Clayton was the exact person who should not use this product, but he wouldn't have known unless he actually did consult an physician before using. Something I don't think many people will do, and to be honest, something I don't think Alterna wants. But he wasn't the only person with negative side effects. There are other accounts from people claiming the product has given them jitters and migraines.

The last thing I want to bring up is Elixir's claim that the FDA regulations on vapor products do not apply to Alterna. This has caught the eyes of the Vaping Legion, an advocacy group who's aim is to rid the industry of those looking to take advantage of the vaping community. From my own lawyers, any product that is intended to be used in a vapor device must go through the PMTA process as well as other FDA regulatory processes that involve tobacco. My own concentrates fall into a grey area, but I have taken the steps necessary to ensure they meet FDA requirements. So to think this "nicotine alternative" is exempt is concerning. And this is on top of all the other inconsistencies around Alterna. From the negative side effects, to the contrasting claims in their own MSDS, to the personal attacks on those who criticize. I just don't see a reason for anyone to recommend or use this product. I want to state that I personally have never tried Alterna. I was on the list to receiving it, but after speaking to Clayton I am no longer interested (plus I don't think they will be sending me any once this article goes out). This is where my article on Alterna ends. I wanted to put all this information out there for anyone interested in the product to see. To know what you're getting into.

UPDATE: Annotated the MSDS quote about inhalation with a more accurate analysis of the information.

Clayton "Steamroom" Moneymaker for video and image as well as personal accounts. 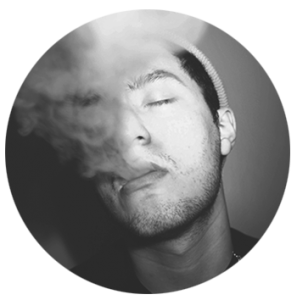