Apexifed is a mixer most widely known in the DIY community for his quick wit, sage advice, massive collection of flavors, and sweet, sweet battlestation. 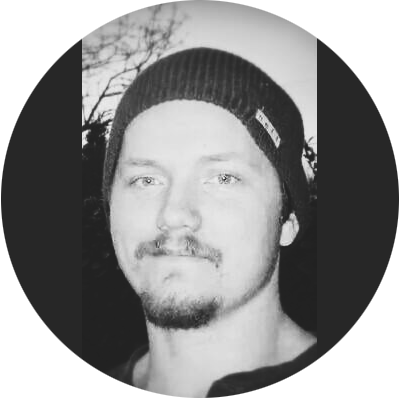 “I wanted to be able to make all the things. Literally.”

(Dave) When did you first start vaping and why?:

(Apexified): I’d love to say vaping helped me kick another habit but really, I wasn’t much of a smoker, in the sense that I wasn’t dedicated (see also: addicted). I tried smoking when I was 9 and I would smoke socially and went through phases where I might finish a pack a week. I enjoyed the effects of nicotine and something about smoking was alluring but I could never quite shake the feeling the pros weren’t outweighing the cons. Around 2009 I stumbled onto ECF and after a bunch of reading decided I had to try it. The rest is, as they say, history.

What got you into mixing?

It was always a nagging desire in the back of my mind, because I’d seen early on how “easy” it was and even seen tutorials explaining it but it wasn’t until I’d tried practically every RY4 on the market and got burnt out on them that I finally started to consider making my own.

When did you really start taking mixing seriously?

At first I approached DIY the same way I do when putting together a piece of furniture from Ikea: look at the picture on the box and figure, it can’t be that hard, I don’t need a manual. What’s the worst that could happen? In my early mixing days there was no method, just madness (a lot of eyeballing and zero precision) After I had been lurking on /r/DIY_eJuice for about a year, absorbing information and finally letting it all coalesce, I finally decided to skip the syringes and start expanding my flavor arsenal.

What were your biggest obstacles when you first started?

Early on it was taking DIY too literally, thinking I could do it all myself. After a lot of inconsistent mixes, bad and good, I realized I needed to do more reading. There wasn’t as much information out there at the time, but once I sought it out, it changed everything.

What was your first good recipe?

The first one that really got the people going was ‘Blue Frost’ which started as a request and became a slight obsession.

A Blue Raspberry Slush with 42 iterations. It's good. It might even be done. 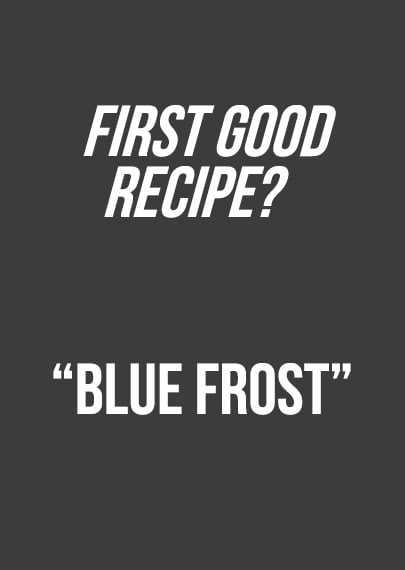 When did you realize you were getting good at mixing?

Probably when people I know started buying juice from me and stopped buying juice from anywhere else. I’m not sure I qualify as good among the mixers I think are good but I feel like I’m always improving thanks to those people and the community and the collected wealth of information available these days.

What flavor profiles did you tend to focus on?

Anything abstract and without reference. I tend to take on a lot of requests from friends and co-workers; for clones/typical flavor profiles, so when I’m just mixing for myself I usually just grab a handful of flavors, put some back and see what I can come up with using whatever is left.

What recipe have you made that was your first ADV?

Honestly there are too many things to try to commit to just one recipe--for a whole day. But really early on I made a Peppermint Ice Cream that I might have vaped for an entire day (or was at least willing to) It was one of the first recipes I posted on ELR, about a year after I first made it. 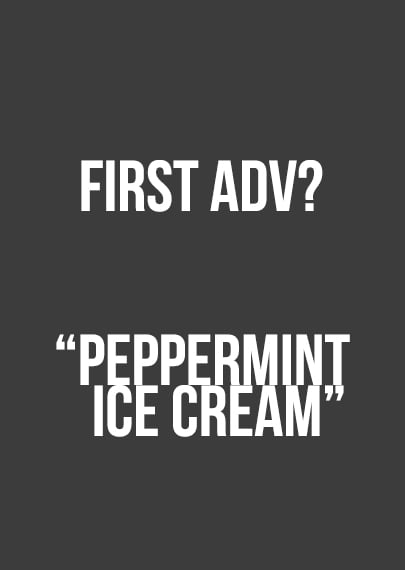 Do you have any tips for those looking to get into more advanced mixing?

The best and most obvious answer is to single flavor test. There’s no better way to take the next step in mixing and creating your own unique recipes than understanding how each flavor works on its own. But another thing I find/found helpful was substituting flavors. Before I amassed my current arsenal I would always find myself short on flavors. Instead of waiting to get all the flavors, I think it’s actually quite a useful exercise to sub for whatever you have and see how it works. Later on, when/if you end up with what you need to make it as the creator intended, you’ll be able to see how those changes affect the profile they were after. Sometimes learning how a flavor works in a mix is almost as elucidating as trying it by itself.

What are your top five must-have flavorings?

What are your top three worst flavorings?

If you could choose one flavor house, which would it be and why?

Unfortunately for my wallet that would have to be FLV. They make some of best flavors but aside from that I enjoy the challenge that some of their flavors present, almost like a bunch of puzzle pieces that I know can make something beautiful but it can take some work and abstract thinking to get there.

What is your favorite recipe?

The infamous Strap-On by ID10-T

Notes for this are in /r/DIY_eJuice's May 2016 Recipe Thread, but basically it's a fruity framework to build on. I love adding one ingredient to this, and that one ingredient varies depending on my mood. FA Kiwi, TFA Dragonfruit, and INW Cactus are some of my favorites to add to it.

What is your “white whale?”

A plain coffee that is easy enough to add cream and sugar to but doesn’t actually need it to taste good.

What are you currently working on mixing?

I’ve been lurking on the tobaccos for quite some time, slowly absorbing information from all the experts (and literally just collecting their recommendations). I feel like I’m almost ready to dive down the rabbit hole and get lost.

Sounds like the man with a thousand flavor will be adding a hundred more once he takes on tobaccos. I definitely look forward to seeing what he comes up with; you know he’s been around long enough to do his homework on every flavor that does into a recipe.

As its invigorating tart kiwi bite quickly gives way to full-bodied juicy sweetness, this exemplifies the supremacy of the Arctic Beauty variety of the emerald fruit over its fuzzy brother. Served cold as the winds on the snowy slopes of Caradhras, it makes for a guaranteed refresher.

Apexified has long been a well-respected name at /r/DIY_Ejuice. He hasn’t always been the most vocal or active commenter there, when he acts as an all-seeing eye, and when he speaks up, what he has to say is always worth listening to -- usually for wisdom, but sometimes just for a laugh. He has also been active in other forums. He was nominated for the recent DIYorDIE World Championship, where he easily made it past the first round and into the top 10 with a recipe that brought the oft-ignored TFA Huckleberry into the limelight, as seen by a surge in recipes using it following the contest. Lately, he has been active on DIYorDIE’s Discord chat as well, where he’s been quick to share his sense of humor and years of mixing experience, and to harass alltheflavors.com owner-operator Scott about the addition of more flavors to the database.

I hope you enjoyed this piece on Apexified. I’ve wanted to do some work for DIYorDIE for some time now, but nothing seemed just right for me until found myself in the Spotlight. Highlighting some of the other artists that make up this community stuck out as something I could get behind.

Go pick up Apexified's AWESOME One-Shot (only a limited time); all Mixers in the Spotlight will be offered a chance to sell a one-shot recipe by ECX.

Remember that DIYorDIE is solely funded through the contributions of its members. Every membership, donation, recipe, or classes purchased, completely and independently funds the DIYorDIE Network. If you would like to support DIYorDIE, feel free to head over to the SHOP to purchase items that keep DIYorDIE producing the best DIY E-liquid Mixing content in the world. Also, don't forget to pick up a Mixer's Membership to get the latest and best in DIY Mixing. And feel free to share this article on your social media, to your family and friends, to help spread the word about the amazing work of the artists in the DIY community.