A Remix of Vaping Rabbit's: Milky O's for #REMIXMONTH
Made for FW COOKIES AND CREAM FlavorBook Entry
-> http://diyordievaping.com/2017/06/08/fw-cookies-and-cream/ 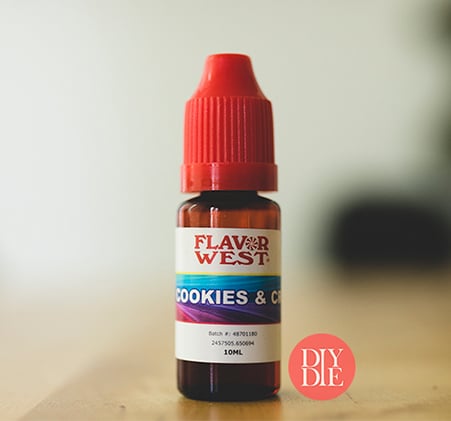 The Vaping Rabbit's Milky O's recipe is one that is simple, sweet, and easy to vape...if you have a sweet tooth. It's and eliquid I picked up quite some time ago due to the hype that was surrounding it. I wasn't really impressed with the flavor, but to my and my palate, it's wasn't bad. I can see why many really loved this flavoring. It tasted much more like the inside of an Oreo than anything else. There was some notes of Oreo cookie, but it was light and the focus was on the cream. It was obvious this wasn't a very intricate recipe due to its one dimensional flavor. And I can honestly say that when I first vaped this, FW Cookies and Cream immediately popped up into my mind. Now with #REMIXMONTH being here, I figured I drop the recipe I had on the backburner for a while, to kill two birds with one stone. One being a showcase for the FW Cookies and Cream FlavorBook entry, and the other, just another remix for #REMIXMONTH. So mix up the recipe above, especially if you enjoy Milky O's, and let me know what you think.

FW Cookies and Cream: This is as simple as a recipe as you can get. FW Cookies and Cream packs enough authenticity in its flavor to stand on its own. Putting it in this recipe at 7.5% is enough to taste the thick Oreo filling as well as a touch of that Oreo cookie. I really want to showcase this ingredients flavor and luckily for us, we don't need to add much to a recipe to do that. Vaping Rabbit's Milky O's is basically the same flavor as FW Cookies and Cream. Their recipe is max VG, and much lighter in color leaving me to believe they are using RF Cookies and Cream, but FW's flavor is just as good, if not more vivid. So as a cookies and cream milkshake, this recipe will hit that spot, guaranteed.

FW Vanilla Bean Ice Cream: I wanted a bit more creaminess to the recipe. FW Cookies and Cream alone has a great cream, but is a bit too thick and dense. This flavoring helps loosen it up allowing for more of a fluid and soft flavor, modeling the milkshake flavor more accurately. I chose this VBIC over any others because its sweeter and lighter than CAP's or TFA's. Perfect for this flavor profile. 2% is all that's needed to add some softness to the recipe, without drowning the mix in vanilla.

FW Sweetener: Last is the sweetener. I usually make this an optional ingredient, and in this recipe that's no different. But I will say that sweetener does help bring about more authenticity in both the recipe and the ingredient, FW Cookies and Cream. Obviously, the original mix by Vaping Rabbit is chock full of sucralose. In fact, I remember exclaiming to myself how sweet that e-liquid was. So if you're going after that same exact flavor, you'll want some sweetener. But it also helps out the main ingredient. Because sweetener brings more focus to the actual  tongue, it makes that flavoring a bit more tactile, increasing its authenticity. So if you enjoy a very sweet eliquid, add a touch of sweetener to this recipe