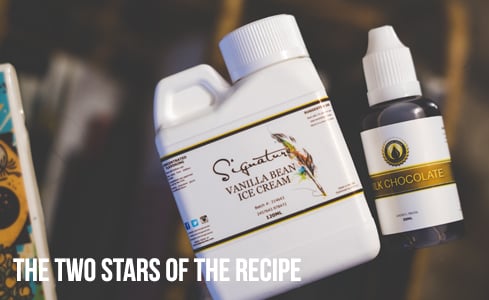 An easy to vape and wildly addicting, rich & creamy Chocolate Milkshake. No complexities, no layers, no thinking. Just a deliciously smooth malt milkshake, blended with a creamy milk chocolate, and topped with a touch of vanilla whipped cream. A recipe that has been derived from Cuprian after running out of mint. If you enjoy chocolates, but have been scared off from vaping them, fear no more.

There's really no story here. I ran out of Creme De Menthe for my Curpian recipe, made a few tweaks, and developed a Chocolate Milkshake. Using INW Milk Chocolate, it's easy to work with and easy to blend in. I already had somewhat of a foundation for the milkshake that I like to use in other recipes. Very plug and play. After a couple batches I landed upon this recipe. Super easy to understand, and super easy to see how it works. What you get is an easy vape. There's no layers, everything is blended in. There's no complexity, everything is easy to understand on the palate. And there's nothing to think about with it, just a delicious creamy chocolate milkshake. The only reason I'm "releasing" this recipe is because of how addicting it is. It's a hard flavor to put down, especially if you're a vaper who loves thick, rich, decadent, vapes. Touched with sweetness, it's a recipe that both quenches your cravings, and creates more.

TFA Milk Chocolate: I had to switch out INW Milk Chocolate after they reformulated their flavoring to taste like bandaids on a latex balloon. This flavoring contains more of a chalky, dry, chocolate flavor, but not as much as Double Chocolate Clear, and when paired up with the rest of this recipe, mimics the chocolate of the original INW well.

TFA Vanilla Bean Ice Cream: Another star of the show. This ingredient is the foundation that holds up the INW Milk Chocolate. The two go together like PB&J and it's hard to think of a life separated. 3% is enough to get that rich vanilla that's thick enough to hold the recipe together. Also, because of how well this flavoring blooms after a steep, it only makes the chocolate more rich as time goes one. A much in this recipe, although you can opt of CAP/FW options if you do not have TFA's or are one who tastes "pepper". Just don't expect your recipe to develop as heavy as this one does with TFA's VBIC.

TFA Meringue: This is here to give the dairy a nice sweetness and "nuttiness". Without the recipe feels a bit lacking in the back end. Like marrying the wrong woman. You're just thinking of how much better life is if you went with the other woman, well in this recipe, you're left thinking how much better the cream would be if you used Meringue. FA Meringue works as well at 0.5%, I just opted for TFA's because it's not as strong. I don't want too much flavor from it, I just want it to help the other flavors.

TFA Marshmallow: This is to give the entire recipe that volume and that light sweetness. Marshmallow is perfect for volume in milkshake recipes where you want weight and fullness, but don't want a dense flavor. Using this at 1% is just the right amount to do so in this recipe. This also really helps out the Milk Chocolate. It helps subdue those off notes you might get at higher temps, like that latex flavor. Marshmallow just sticks to it and levels it out. Good stuff.

FW Hazelnut: This is only here to give that "malt" flavor to the milkshake. Taking a page from the cereal world, FW Hazlenut is perfect for that dairy / malty note. 1% is perfect. I do not recommend any other hazelnut. FW's is perfect in this situation and other hazelnuts tend to taste a bit too dry. Here we need to keep the creams.

CAP Vanilla Custard: This is to butter up the entire recipe and allow it to steep with that rich vanilla egg flavor. Pulls everything together. Think of it as the glue in the recipe. Even at 0.5%, it's vital in this recipe and vital to the success of the flavor profile.

TFA Sweetener:  I enjoy all chocolate with sweetener. It removes any off notes, picks up that chocolate to right where I need it, and softens the creams allowing them to coat your entire palate. I enjoy it at a high 2%, but even 0.5% would be good. I just don't recommend leaving it out completely. If anything, I'd use a bit of Ethyl Maltol if you really can't stand a bit of sucralose.