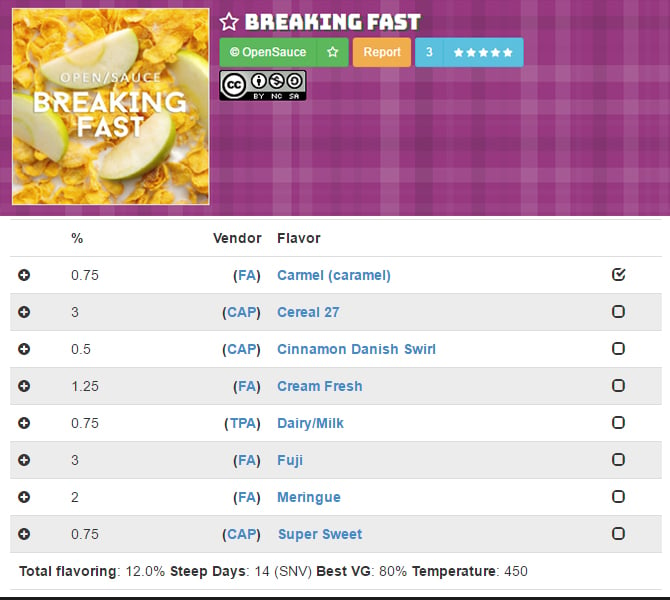 The flavor of this recipe is my favorite aspect of the recipe. I feel like all but one flavoring was exactly the right choice. Using CAP Cereal 27 was the perfect addition to the recipe as the corn flake base. Using FA Fuji as well as the apple was perfect, as it's bright enough to sit on top of the mix, yet packs enough flavor to really enhance the entire recipe. Not to mention the great sweetness it carries that works very well in this main profile. And lastly the cream base is perfectly balanced. You can absolutely taste its flavor notes within the recipe, but like OpenSauce wanted, the doesn't drown out the recipe. The blend of everything makes for a delicious flavor that fans of apple/cinnamon vapes would love.

In terms of Risk/Innovation, this isn't really a new profile. The main profile itself is something we've seen many times before, but I do like OpenSauce's take on the flavor. Within the recipe we do see some innovation however. First off the use of TFA Dairy threw me off a bit, but the way OpenSauce uses the natural sweetness of the Fuji and the heavy sweetness from the Super Sweet, take out any off-notes you might get from that flavoring. But the best aspect of the recipe is the use of FA Caramel to enhance the flavor of the CAP Cereal 27. It just works and pushes the CAP Cereal 27 in a way that gives it a much richer flavor. This is something we should see more often with CAP Cereal 27.

Unfortunately the biggest gripe I have with the recipe is its accuracy. Now mind you, I'm basing this recipe off as a shake and vape (which the recipe specifically states is OK to do). But the recipe doesn't quite capture the essence of "cereal". You have apple, you have cinnamon, you have an impression of cereal, and you have a touch of dairy. But they all seem muddled together and the texture is subpar at best. With cereal's, much of the authenticity is driven by the texture, that graininess. And in this recipe, it seems as if the CAP Cinnamon Danish Swirl is hindering it by imparting this soft, fluffy, bakery note around the recipe. It doesn't taste bad, but it's a real step back from that cereal profile, and unfortunately really hurts the recipe. I'm sure it's an easy fix, maybe a touch of AP would do the trick. But the recipe in its current state misses the mark on what OpenSauce says is a "Cornflakes Cereal Milk with a Sweet Apple Accompaniment"

If you want your recipe critiqued on DIYorDIE, send your recipes over to [email protected] Make sure all recipes you send are complete with a description of the recipe, and the flavor notes to go along with it.