For Honor is an exciting, nail biting, fighting game with a deep and complex fight mechanic, that's often more satisfying than it is frustrating. Unfortunately, it's plagued by tons of issues such as the abysmal option to use P2P servers, a completely broken gear rank, game modes that don't do what they're made to do, and matchmaking that makes no god damn sense. It's such a shame because the way you play For Honor; the mechanics of the stance system, the extremely complex attack system, and the natural progression of the heroes, are so strong that this could have easily been a game that reached cult status.

Now there are two ways you can play the game. One is the Campaign where you're taken through the three factions - Vikings, Knights, and Samurais - fighting your way through the story taking on different heroes of each faction. While I don't want to spoil any of the story - a somewhat mediocre one which takes only about 10-15 hours to complete - it does give the player a great entry into each faction and allows the player to use each hero in specific ways catering to their fight styles. So it mainly serves as a great training tool, to get players ready for the extremely strenuous and difficult multiplayer.  Then you can get into the multiplayer where you can choose any hero you'd like from any faction, pitted against players in various game modes, with the main goal of just winning. The multiplayer is the main draw where you'll find most players fighting each other for their chance to gear up their specific "mains", in hopes that someday there is a rank system to encourage competition. So yes, as of now, there's really no ranked play, but that's something I 'll get to a bit later. The way this game is played is much like Bushido Blade, meets Super Smash Brothers, meets Total War, meets League of Legends, meets Diablo. It's as awesome as it sounds. It's a fighting game wrapped up in these various modes where gear and loot (as well as personal skill) push the player along to continue. You can see the MOBA influences with one of the modes use of "lanes" and "minions" and it does add a bit of depth to the game. But when it comes down to it, it's a fighting game that relies on its strong and extremely complex fight mechanics to garner a satisfying player progression. Fighting consists of 3 different "stances", the overhead, left, and right and two attacks, the light and heavy attack. In order to block you need to be facing the same direction of the opponents stance, so variance and skill is needed to win any fight. There are combos and chain attacks that differ from hero to hero, there is a feint system, you can guard break, a great parry system, throws, tech throws, and there are a few moves that are "un-blockable" or "uninterruptible", all of which are used to throw off your enemy. So move-spamming is something that is punished rather than rewarded in this game. There's a revenge system, where you're given a blast of health and stamina if you are ganged up on, so those 2v1, 3v1, or even 4v1 battles become winnable if you're a player who's skilled and uses the revenge system correctly. And then on top of it all, there are hero specific "feats" or special abilities than turn the tide of battle. So that's the bulk of the gameplay. Various game modes, in which all of them center around combat and duels, that reward players who are skillful, and motivate the player to continue on with new gear, customization, and feats attained for winning. 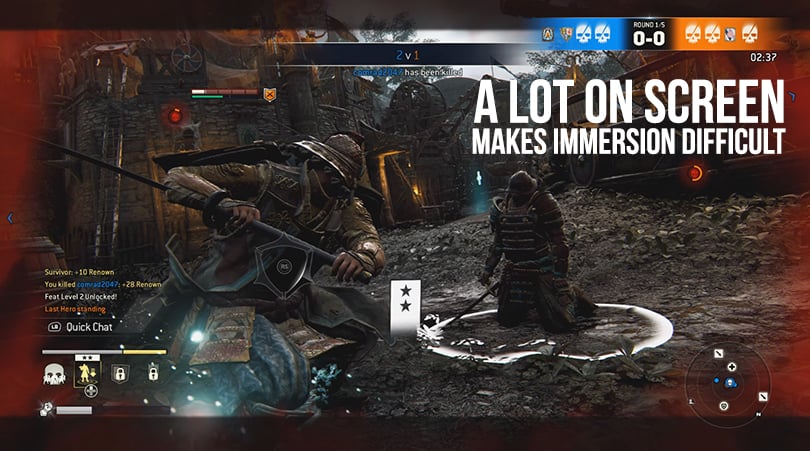 The game modes include Dominion, a 4v4, MOBA like brawl where "minions" push on the map, you need to hold different points on the battlefield, and every time you die you respawn after a certain amount of time until the match is over. There's also Skirmish mode. Another 4v4 brawl where your goal is to just kill the enemy to reach a specific score, you respawn after death, but there are no points to capture nor "minions" on the battlefield. The last 4v4 mode, and my favorite of the bunch, is Elimination. This is where you fight the other team, starting out one against one, and there are no respawns, with the last man standing being the winner. This mode has the most satisfying wins, and also really showcases the skill of the player as well as the deep fighting mechanics. The other two modes are Brawl; which is elimination but only 2v2, and the other is Duel, which is just one on one. While it seems Dominion is the most active of modes, Elimination, Brawls, and Duels, are the most fun and you're less likely to get "cheated" by nasty 3v1 battles.

I'm playing this game on PC, completely maxed out, and it's gorgeous. One thing I want to praise the developers on is ultra-wide support (21:9 aspect ratio). Playing this game maxed out, on a 3440x1440 100mHz G-Sync panel, on a GTX 1080, I'm getting around 80-100 fps steady with no framerate issues or frame drops whatsoever. In terms of optimization, THIS is how to launch a game. It runs perfectly. Player models look beautiful. They are designed very well, and the gear they attain as well as their weapons and armor all compliment the medieval nature of the game. The weapons especially look great, and getting that one rare Axe or Katana really feels rewarding. The maps look pretty good and there's a lot of detail - like one map where you're running through a bridge and a soldier falls from the castle walls above right into your path. But I do wish the maps contained a bit more depth. Because of this "MOBA" like battlefield, you have these maps that are all built in the same way with a main lane, and two left and right lanes. Also, there's not much "ambiance" in the maps. They feel more like boxing rings than actual places on earth but luckily the gameplay kind of lets that slide. Sound in this game is sub-par. The clanking of swords and the thuds of shields are all portrayed well. The score in this game is pretty good and does immerse the player in these grandiose battles quite well. But I can't get past the terrible, repetitive, chants each hero belts out after every attack. There's not much variance in how a hero "kiai's," and it gets old quick. I'm sick of hearing Lawbringers "EEUUGGHH!" after every fucking attack he throws. So the sound is fine. Nothing groundbreaking, nothing innovative. And the overall presentation is nice. I'm just happy that this game, one that requires precision and fast reflexes, runs extremely well and looks nice while doing so. 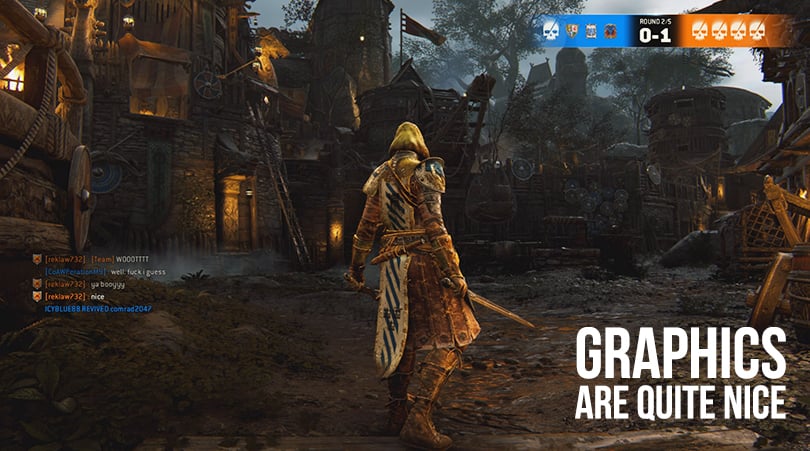 One thing this game is known for, and will be known forever for, is the fighting system. Easy to learn, hard to master; and any game that introduces that concept as well as this one has, will succeed. Most of the reward comes from learning how to win, rather than winning itself. Finding out how to defeat that one hero that's been giving you problems is utterly satisfying, and it’s the sole reason I keep coming back to the game. There's a natural progression in the game based on skill, and I wish more games implemented this. Another aspect of this game I enjoy, is its hero customization. While the system is broken (I'll get into that in the cons), it is rewarding putting in the work to get that one weapon that compliments your fighting style perfectly, and looks badass at the same time. Not to mention the immense amount of visual customization you can make to your character to further make the experience more personal. One last thing I want to commend the developers on is allowing you to choose any hero you want right from the beginning. While you need to "unlock" the hero to win any loot for it, you can jump into any battle with any hero you'd like, learning its skills to see if you want to continue down its path. So you're not punished for choosing the "wrong" hero for you, and that's a good move.

Now I need to talk about what ruins the game. One thing I want to mention is the "gear rank". This is where you attain different gear and loot from either winning, or purchasing via a lottery system with in-game currency that you can purchase with real cash. This gear gives you different attributes that can do things like increase your attack, increase your defense, or decrease your stamina cost; there are many different attributes that this gear affects. But there are only 2 of the 5 game modes that actually allow your gear to take effect. The other 3, your gear rank has no influence. This is good because in modes where you gear matters, anyone with a credit card can buy a stacked out hero, and run the course. It would take thousands of hours of playing to reach that level without paying. The Ubisoft way, I guess. So what this means is that natural progression of the game, has no meaning, since your rewards are useless against someone who "pays" for that advantage. It's a game breaking flaw in For Honor's system, and will be the reason it's short lived. One other huge issue is the game stability. Of course, Ubisoft has chosen the easily exploitable P2P game hosting. WHY?!What made them think a fighting game that relies on milliseconds and strong netcode would work on P2P hosting? Oh because cost. At the time of me writing this review I've literally gotten so fed up with dropping matches and "lag switching," that it's hard for me to go back and play it. It takes roughly 5 minutes to get into a game, which is a long time. And to drop literally 2 seconds afterwards is unbelievably frustrating. One minor con is the faction system. There's literally no reason for it right now, although they state they will implement something for it soon. Too bad half of the player base will be gone by then. And one last major con I have with this game is the balance. Overall, balance is okay. But just reading tutorials or watching the pro's for 5 minutes, you'll find the heroes everyone play because they are just that much better than the others. As well as the heroes no one use because of how terrible they are. If you pick this game up I recommend watching a few pro's play and seeing what heroes they main, that way you're not wasting your time progressing a useless late game hero, like I have done. All these cons hurt the game tremendously, and you'll see many reviews stating the same reasons for their troubles with the game.

Overall, I think this game is damn fun, but undeniably annoying. The fighting mechanics, the game modes, the comradery, the "honor", the player base, the weapons, armor, customization, and the feeling you get when you step toe to toe with a player who's skills are perfectly matched to yours, ready to fight to the death, all make the game so much fun to play. But the completely broken gear system makes game progression get old quick especially when you're up against completely stacked "pay to winners." And the terrible P2P netcode will make you want to pull your hair out. Fortunately, those two game ruining things can be fixed in updates. I just hope that Ubisoft takes a page from the Overwatch team, and take the criticism from the fans to fix them. And if Ubisoft DOES fix them, then expect to see me in there, sword in hand, ready to hone my skills against any button masher out there. 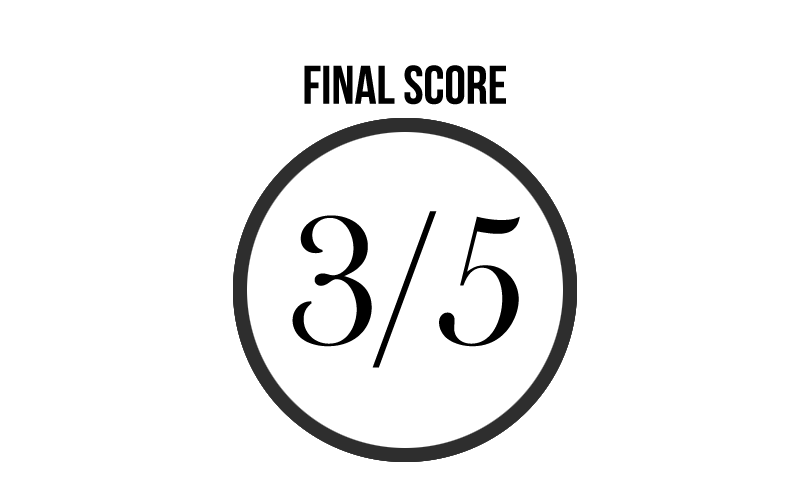