Many beginning mixers fall into an issue with their recipes, where the flavor isn't quite up to par. Whether the flavor is a bit too light, whether the flavor doesn't quite have that pop, or whether the flavor just isn't quite "right," beginning mixers might find their recipes unsatisfactory. One subject I want to talk about here is that of vibrancy. The way I want to explain this is in relation to color.  If you take a photo, put it into a photo editing program, you have the option of changing the vibrancy of the image. What this changes is the strength of the color inside the photograph. Now, there's a difference between saturation and vibrancy. And the same goes for mixing, the saturation of your flavors differs from the vibrancy of them. So in photography, increasing the saturation of the photo increases ALL color involved in the image. It's a general push of everything you see in that photograph. Whereas, increasing vibrancy only turns up the softer or more muted colors, leaving the already strongly saturated colors in the photo, alone. It's a "smarter" way to increase the color of an image. So for example, if you crank your photo's saturation all the way, the image will be distorted and all the color will be blown out, harsh, and unpleasing. But if you crank the vibrancy all the way up, you will end up with just an image with a ton of strong color. The photo won't look distorted and the color won't look unnatural. Now, you might not like the outcome of cranking that vibrancy to the max, but you won't ruin the image; so as with anything in life, balance is key.

Now let's take this over to mixing. You have a recipe that feels soft, lifeless, and the flavor just isn't very lively. The first thing you might do is turn up all the flavorings in the recipe to get yourself more flavor. This is equivalent of turning up the saturation of a photo. Taking every ingredient in the mix, and adding a bit more to it. This is a good step and I don't discourage it. But like the photo, remember that there will be a point where you can distort the overall flavor, and make the mix taste harsh, blown out, or unnatural.  Finding that point where your overall flavor is just right is key, and only you can answer that question. But cranking up the "saturation" of your recipe only works when your recipe is on point, but just a bit soft in flavor. But say you have a recipe where only a specific layer or part of your recipe is soft, where other parts seem to taste just fine. An example would be that you're making a cereal recipe, and the milk aspect of the recipe tastes great, but the cereal is too soft or low in the mix. This is the case of turning up the "vibrancy" of your recipe. Increasing those notes and flavor profiles that are too soft, but leaving the already strong flavors alone. Balance is the key in this, so don't go overboard. One last thing I want to mention is that you can add vibrancy to a recipe, without only turning up concentrations. Say that cereal recipe you have has a great milk layer, but again, the cereal layer is a bit soft. You can turn up the vibrancy of that layer by adding other flavorings to it, to increase its flavor. Maybe adding a touch of lemon, maybe adding a touch more texture, etc. You're not only beholden to turning up concentrations. 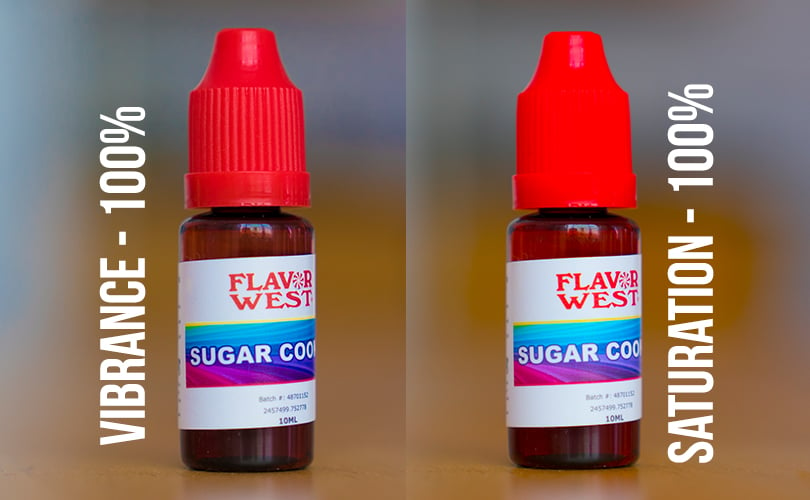 So the point of this article is to help you understand what vibrancy is and how to troubleshoot your recipes if they lack it. Understanding the difference between saturation and vibrancy will help you immensely, in your mixing. Knowing when your recipe needs some more vibrancy as opposed to an overall saturation will cut your tweaking time down tremendously. I have a homework assignment for you. Take any recipe that you enjoy and when you go to mix it, add an overall saturation to it. Then take that recipe, but in a different bottle, only add some vibrancy to it, to a layer that you would like to see more of. Then mix up a bottle of the recipe normally. So have one bottle that is the recipe in its original state, one bottle where all the flavorings in it are turned up a couple percentages, and one bottle where you've added some extra flavoring to a layer you want to taste more of. Then taste the difference between them all. Nothing will help you understand the correlation of those terms more than that experiment. And ultimately it will lead you to mixing "smarter" and again, allowing you to cut down some of that time you might spend tweaking a recipe to get it just right.