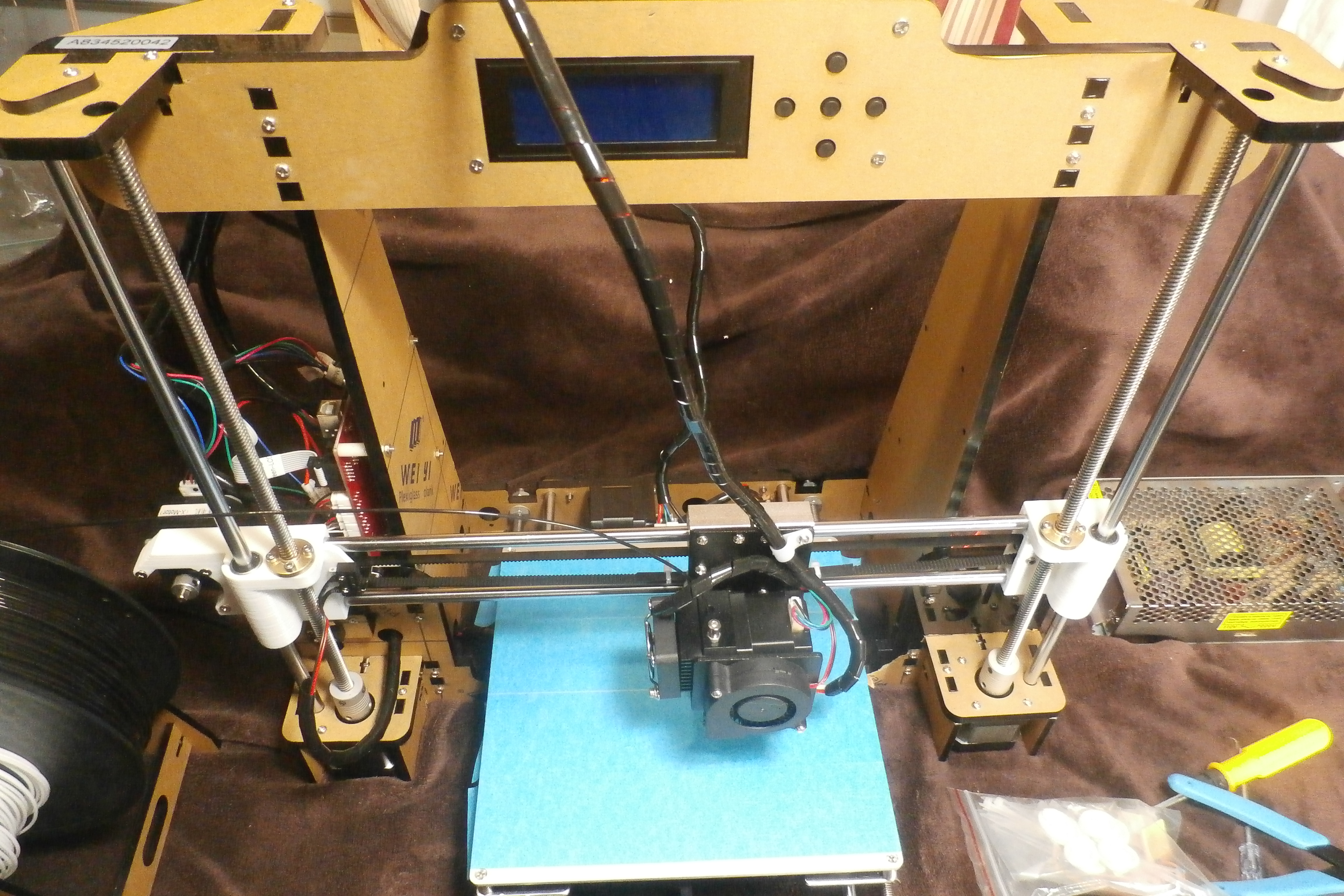 This is a 3D Printer KIT. It comes in pieces that you have to assemble yourself by following the instructions. What's better for DIYorDIE than a DIY 3D printer?

The assembly itself was not too difficult. It took about 3-4 hours to get everything assembled following the instructional videos. That's not too bad, considering I've seen some people say it took up to 12 hours to finish assembly. The instructional videos are extremely easy to follow. There is a file on the SD card that comes with the kit that contains links to the videos. I would also say that the assembly was fun. It gives you a great sense of accomplishment when you turn the printer on at the end and see nothing went haywire.

The kit comes with all the things you need to put the printer together. Other than the printer parts themselves, this includes 2 screwdrivers (one is reversible), a wrench, zip ties, zip tie anchors, cable anchors, cable management wrap, finger condoms (I assume to prevent static electricity damage), wire clippers, and you will end up with some extra bits at the end. There are some extra acrylic pieces that are small and easier to break if you over-tighten them, so there are extras. It's a good thing too as I did break one piece, but luckily had a replacement. If you get this kit I would suggest you keep the tools with the printer as you may need to tighten stuff back up eventually or add modifications that you have printed. It also comes with tape already stuck to the heat bed. You may be tempted to peel this tape off, but just leave it instead. You need something on the heat bed for the plastic you print to stick to and the tape provides that stick-to-it-iveness. Though you will need more tape eventually so go ahead and pick up a roll of blue painter's tape. It provides a good print surface while not leaving any sticky residue on the bed. One more thing I that I found handy was a pair of precision tweezers. I used them for holding the screws or nuts in place as my big sausage fingers just couldn't do it.

The first thing I printed was something that was suggested by other owners of this printer. That's an upgraded air director for the printer head fan. It helps cool the plastic quicker and more evenly. For a first print, it came our perfect. There were no mess ups or anything like that. I used some of the filament that came with the printer as it comes with 10 meters of white PLA filament.

This printer does not come with auto bed leveling right out of the box. You will have to make sure your heat bed is leveled before each print. This is another good reason to keep those tools near the printer as you will need a screwdriver to accomplish this. You can upgrade the printer firmware and add an auto leveling sensor to add that feature, though. You may also experience a couple of wonky things with the motors or something, but the answers to all these errors are easily fixable with help from the facebook group for this printer. They will help with any problems or upgrades you may want to do and I suggest you join the group should you get this printer. They are a great resource to keep handy.

The user interface is very simple. There is an easy to read screen and 5 buttons (up, down, left, right, and select). All you need to do to start printing is insert the included micro-SD card into the control board and select Mount SD in the menu. From here you can go into the SD card and select any printable file that is on it. It's not the most responsive interface out there, but it works fine.

The micro-SD card that it comes with is an 8gb card, so there is plenty of space for things to print. On the card is also software to install on your computer for creating the printable files and putting them on the card. It's very easy to use software, so you shouldn't have any issues figuring it out. It also comes with a USB micro-SD card reader to make it easy to access on any computer.

There are some common issues with this printer. The main one being that the main power cable inputs on the control board could melt or burn. This is an issue several people have run into and one guy's house even caught fire. There are fixes for this though. One easy solution is to solder the wires directly to the board instead of using the connectors. Mine didn't melt or have any issues with the connections. Not yet, anyway. I did have an issue with mine though. One of the large capacitors on the power supply unit (PSU) blew. Not like a fiery explosion, but more like a quick pressure release. This did, however, render the PSU unusable. From what I can gather, this is extremely uncommon. I was just a lucky one I guess. A good thing is that the PSU is easily replaceable with any ATX PSU that is at least 350w. So it's a pretty cheap fix.

Don't expect your prints to complete in just a few minutes. Depending on the size of the object it may take several hours to complete. It's not super fast, but this holds true for most consumer 3D printers. The speed of the print depends on the size of the object, the resolution, and other settings. You'll just have to play with stuff until you find what you like. Another helpful resource is Thingiverse. You can find tons of free things to print and most of them include suggested printer settings to achieve an optimal end product. There are also many different materials you can print with. That is something else you will need to experiment with.

Is It Worth It?

Yup I am really glad I got this 3D printer. I had fun building it and I have fun finding and printing things.  I've printed several cool things and had several failed prints as I'm still learning. It's cool to realize you need or want something then just print it. It really is an amazing and fun technology with seemingly endless possibilities. As inexpensive as this printer is, I would highly suggest people get one. If you are interested in it, check it out at Gearbest

BCrunk is a long time member of DIYorDIE, being one of the first Co-hosts of InTheMix Podcast and a regular reviewer for years.