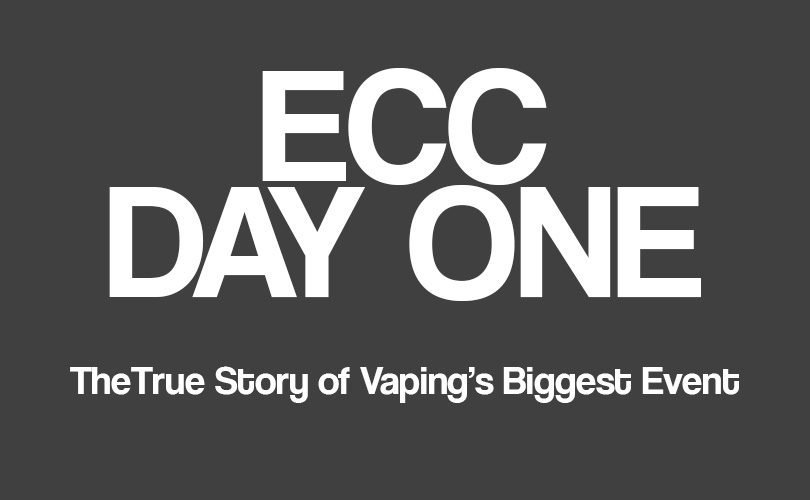 So I left Philadelphia around 3:30pm got to the airport at 4pm for my 5:50pm flight. At the airport had a bit of trouble getting through security. Not really for all the vaping products I was carrying on my carry all, but my laptop was triggering the system. Go figure. After which I had a nice and easy 7 hour flight to Southern California, landing at LAX at 9pm Pacific time. Then I had to get my stuff together and head out to the rental car spot. Unfortunately the rental car place stopped sending shuttles to the airport and closed before I had a chance to get there. This meant I had to take a taxi to the 45 mile away, AirBNB, which cost a cool $200. Finally though, I got to the AirBNB at around 10:30pm PST and I was able to settle in before the big day ahead.

So the first part of the show, on Friday, is the Business to Business. It's where all the companies mingle together and trade contact information hopefully to drum up business between eachother. It's a great way for smaller companies to reach out to the bigger guys, cross promote, and mostly, just gain presence from within the industry. For me, the only reason I was there was to help ECX set up and get our booth ready for the rest of the weekend. The other guys were their to try and drum up business. What I've found that I thought was interesting was that many of the companies seemed to care more about instagram promotions, and making sure they were the "loudest" company their. Any type of traditional business networking doesn't apply to the wild west of vaping. I also caught glimpses of some really insane eliquid marketing.

In the video you'll see me talking to "Blake" from Capella. Blake is a sales guy just trying his best to remember the names of the products they carry while also promoting the larger side of Capella which is wholesale flavoring sales to large eliquid distributors. In my opinion, DIY is the last thing on Capella's mind at ECC, which is to be expected. The DIY presence was minimal, if not non-existstent, if I wasn't there. But that didn't stop me from asking them about DIY. Unfortunately what I got was a cookie cutter sales pitch that seemed more script, than an honest dissertation between industries. And this isn't a fault on Blake, or even Capella, really just the market that's in a weird grace period.

So this will be something I talk about throughout the rest of my stay in California. Cali just went through some of the hardest times in terms of regulations, and being hit with a devastating "super tax" you'd expect a strong advocacy front and presence at the show. This is simply not the case. It's a shame how hard the NotBlowingSmoke guys work, only to have 15 people show up to their talk. I mean there's a fucking Pokemon themed e-liquid, who's excuse is that they're "marketing to the 90's scene and not children". Yeah good luck explaining that to the FDA you fucking idiots. But again, it's hard to blame them. This is where the industry has stagnated towards, especially when things like ECC willingly invites them to show up to their event.  It's funny to people like us who are "woke" and have seen the gorgeous and bright light of DIY. But for the future smoker who might not have a vaping industry in a years time, it's not so funny.

I was then talking to Mette, a spokeswoman for NicSelect. I spoke to her for a while about the future of vaping, the future of NicSelect, and how bright it looks for companies like ECX, and DIYorDIE. We then spoke briefly about their partnership between Nicotine River. It was weird. As we know, many companies use NicSelect nicotine, but Nicotine River is the only "official reseller" of NicSelect. What I've quickly found out is that Nicotine River reallllyyyyy like to make that point known, speaking to many of the other resellers of nicotine. The weird part was that Nicotine River had a booth, which lay right in front of NicSelects booth. Only, they weren't there. I figured since it was only the B2B day, maybe they felt they didn't need to be there. But we'll soon find out they weren't there the whole show. Just an empty booth lay across from NicSelect. The interview in the video you see me talking about DIY presence at the show and talking about Pure Nicotine with Mette. It was interesting hearing that there are no qualifications or certifications needed to obtain a very dangerous substance. But I'm sure that NicSelect wouldn't sell Pure Nicotine direct to a single person anyway. Just funny how the laws work.

End of Day One

So that was the extent of the first day. What really sucks is that the Wifi at this AirBNB is atrocious. I really wanted to push tons of videos and live feeds out to you guys, but with the slow internet, it's almost impossible to do so. It took 12 hours to upload that short video above. But I'm doing my best to cover all the stuff I think is worth covering for the DIY minded vaper. Anything interesting, exciting, news worthy, I'll try to cover the best I can for you guys so those of you who aren't able to make it to the show can experience it in the same way that I am.