My Dude: A My Man Remix
by ENYAWREKLAW View Mix

Some state they can taste a touch of chocolate in this recipe. I as well as my partners do not taste any. So I wouldn't add any in but if you think there is some chocolate then I added an optional ingredient that will give you that slight chocolate taste. This is not part of my recipe though, so mix at your own discretion. 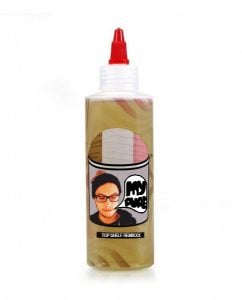 So remixing the popular e-juice My Man by One Hit Wonder was actually quite easy. Maybe it was due to me downing 180ml of it in two weeks, but the cloning process took a fraction of the time it normally does. Or maybe because it's based on one of the most popular E-liquid recipes of all time, Mustard Milk.

CAP Sweet Strawberry: CAP's Sweet Strawberry is probably THE most popular strawberry flavoring in vaping. I taste it EVERYWHERE and especially with these "premium" eliquid lines. This is due to the fact that Capella is a main flavoring wholesaler to these companies, and most "premium" lines are just capella flavorings. My Man is no exception. What I get is a sweet strawberry, some what artificial, that pairs quite well with the creams involved. At 4% you get just that, and it creates a nice and tasty flavor profile that lingers throughout the entire vape.

TFA Vanilla Bean Ice Cream: Now I figured that in the original, they would be using CAP's version, and they probably are. But CAP's VBIC is just lacking on that weight that I enjoy from a nice ice cream. TFA's is much more fitting, and profiles work much better when in conjunction with all the other flavorings. I remember tasting My Man and thinking that "This tastes pretty much like Mustard Milk". So it was a no brainer testing my first batch with TFA VBIC. And god damn I was right. This makes the flavor and gives you that Vanilla Ice Cream aspect of My Man. At first I thought it was a much higher concentration, like around 7%, but after vaping through my 180ml of My Man, I realized it was much more strawberry than it was cream so at 4% plus the other creams, you get just that.

TFA Marshmallow: The marshmallow here lifts the sweetness of the strawberries, and also rounds out the creams a bit making them more of a dairy as opposed to a thick cream. Without this flavoring things start to blend together too much and you don't get that separation between the flavors as much, so a touch of this stuff helps. Marshmallow and Strawberry just works together.

TFA Sweet Cream: Adding Sweet Cream just gives the Ice Cream some more sweetness and allows the flavor to really open up. Again, CAP's version seems more appropriate, but TFA's is just gives a better flavor. I don't clone things. I make them better. And here using a touch of TFA's Sweet Cream does that.

FA Fresh Cream: Now I didn't know if I wanted to add this in at first. My first batch it wasn't in there and the overall flavor felt it was missing something. Same with the original My Man flavor. Fresh Cream adds depth to the Ice Cream Flavor, it allows the strawberries something to hold onto, and it does all this without adding any extra weight. That airy flavor profile just helps out and though you can leave it out, I recommend a touch of this to give that VBIC less of that "custard" flavor profile it sometimes has.

TFA Sweetener: If you saw my video where I talked about this recipe I mentioned how fucking sweet it was. It would leave behind tons of sugar all over my mouth. Though it was jarring at first, I realized how much it helped the Strawberry flavor from getting drowned out by the VBIC. At 2% you'll get that "sugar lips" effect, you'll add that sweetness to the strawberry, and you'll add that sweetness to the ice cream. I personally believe that the original recipe uses 3-4% sucralose because at times it's sickeningly sweet. But just use 2% and you'll get all that you need from it.

(optional) TFA Double Chocolate Clear: Now I don't think there is any chocolate flavor in My Man. I don't even know why they say there is because I haven't tasted the slightest bit of it in the entire 180ml. Also, many of those I talked to who've vaped it say the same thing. So when going into the recipe I knew I wouldn't add any in. But I do know of a couple people who say there is a slight chocolate flavor on the backend. With that information I figured TFA Double Choco Clear at a low percentage like 3% would fulfill that flavor profile. So if you're one who thinks they taste chocolate in that recipe, then go right ahead and add it in there.