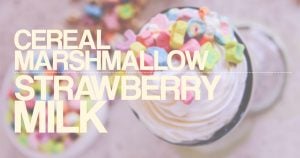 This recipe has been in the works for quite sometime now. The first time I started to chase this flavor profile was when I first released Cereal Milks. I felt there was more I could do with that sweet, rich, dairy base and complex layering. The banana in Cereal Milks really brings out that high note that comes in a bowl of left over cereal, but what it didn't do that I wish it could've was add to the authenticity, or accuracy of the flavor. Sometimes you'd get too much of that banana and it would pull you out of the experience. So I needed to hone down the flavor, make it different and interesting, while also making it taste as true to the reference as I could.

I use this flavoring the same exact way I use it in Cereal Milks. I want its sweet flavor, not its fruity flavor, and I need its creamy qualities to really coincide with the rest of the dairy's I will introduce. I rave about this flavor all the time, and it's because of how fun it is to use it and its versatility. In this recipe you're not going to get that prominent fruity strawberry profile. In any strawberry milk, or ice cream, the strawberry really only adds its sweetness, and at 4% that's exactly what you get here. Think of the flavor you get from it at that concentration, as "pink"

This is another flavoring that I love to use with creams and desserts. I use it in the recipe at 4%, which is a concentration I think fits this flavoring perfectly. Here in this recipe, vanilla swirl acts as the foundation (with a little help from the CAP Custard). It's thick and allows all the other flavorings to sit right on top of it. The best part of this recipe is how rich it makes everything. It's slight addition of Vanilla also adds to the complexity of the entire mix.

All I want from this ingredient is the Diacetyl. If you are not a fan of DA, then you can leave this out (though some of the other ingredients may include trace amounts). But that DA really adds to the richness, the weight, the mouthfeel, and most of all, the steep. A little DA does wonders in a steep because it makes all the other dairies incorporated a ton more rich. It's velvety properties and again, slight vanilla taste add to the increasing complexity of this recipe.

Vienna cream turns these heavy creams, and sweet sugary flavors, and introduces a straight up "milk" flavor. Giving balance to the entire mix. No milk recipe should be made without this stuff because it does such a good job at adding in that profile, without adding any weight, or introducing any unwanted profiles. We're using just a touch of this stuff at 1% but trust me, it makes all the difference.

Again, what cereal recipe can exist without some FA Meringue. This is the "cereal milk" flavor, and here we're only using it at 1%, because we don't want to add too much of it's creaminess. It may sound counterintuitive, but we really want the other dairies to make for the creamy profile. We strictly just want the sugary sweetness, and its quintessential "cereal" qualities.

This is the most vital ingredient in this recipe. When creating "Cereal Milks" and also many other Strawberry and Creams, I noticed I was missing something from the "milk". Something just seemed out of place, like the sweetness weren't coming together, and there was a slight clash of flavor within the recipe. Also, with the milk, there was a certain "nuttiness" that was missing, which in turned distracted from the authenticity of the recipe. Well, once I introduced INW Marzipan into my dairies, I figured out this was the missing element. In this recipe, the marzipan not only brings everything together, but it also makes up that "cereal marshmallow" flavor. Not only that, but it aids the sweetness of the strawberry and really turns the complexity, and familiarity of this mix up a notch. This may be a difficult flavoring to find, but FA's offering is not far behind and can do the same things, but its concentration is something I don't know, so you'll have to play around with it. But I implore you to get INW's because in this recipe, you'll see how effective it is and how much more delicious your recipe will be.

Now I took some notes from my Funfetti recipe and translated them over to this recipe. There needed to be some kind of grainy element in this recipe to imitate the cereal bits that comes in cereal milks. Acetyl Pyrazine, FA Cookie, TFA Graham Cracker, and INW Biscuit are all usually the first options to choose from. But what they all don't do is add just a plain cookie type grain. Biscuit is too buttery, and the others add to much of a "dark" almost bready cookie flavor. What I wanted is a nice white and crumbly sugar cookie, but just enough to be able to taste throughout the entire recipe while also not sitting too far on the nose. At 3% the cookie strictly sits right next to the heavy base in the back aiding to that "bottom of the bowl" experience.

This flavor adds a nice thick and fatty nut flavor that turns the entire mix into an "almond" milk. That's the reason I state it as optional, because without it you get a much more "red top Whole Milk" flavor. To me, 0.5% adds just the right amount of complexity that coincides with the other ingredients perfectly.

This is another optional flavoring because it's not needed. Yellow Cake at 1%, in conjunction with CAP Sugar Cookie adds to that thick, malty, flavor that will really bring out the richness of this recipe. It also aids in authenticity, by giving the Sugar Cookie more of that quintessential "cereal" flavor. It's not needed because the change is quite subtle, but if you have it and are a fan of specifics, then add a touch of it in.

Adding sucralose is not a must, but it very much helps this recipe in almost every aspect. The sweetness the sucralose brings brings out the inherent sweetness as well, since the recipe relies heavily on that "white" sugar flavor profile, so EM is not necessary and it's why I opted for the sucralose as well. 1% is a good amount, but if you'd like more of a lighter sweetness you could use lower, or just omit completely.