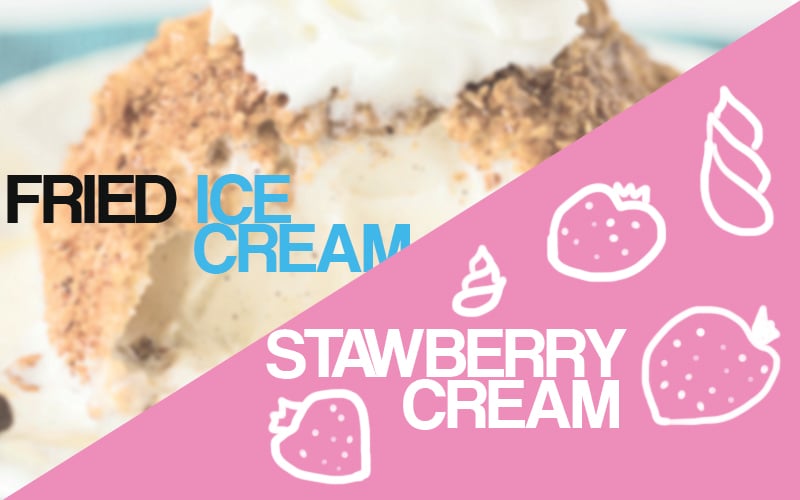 This recipe is really a nice smooth and rich flavor. It's on the verge of being extremely bold, but so well rounded that it wont blow out your senses. For anyone who doesn't know what Fried Ice Cream is, you owe it to yourself to try some, and THEN mix up its vapor counter part.

A very simple yet pleasing Strawberries and Cream. An old staple in DIY ejuice, every one has their own interpretation of THEIR Strawberries and Cream and this is Wayne's. A Light strawberry "malt" flavor with a heavy milk to follow. With "Strawberry Ovaltine" in mind, you can tell where the recipe heads in terms of flavor.

FLV Cereal Crunch: Like stated in the video, this is the main flavor you get when you eat the actual dessert, and it's the main flavor you get when you vape it. It has this extremely delicious flavor profile that pops in your face when you vape it, and at 3% it's no exception. The reason we chose this instead of any other flavoring, or graham cracker, was because of how close it mimic's Frosted Flakes, when used against a "Milkstone". You get that crunch, right out the box, and with some accentuating, you can turn that slightly offputting back note, into a more sweet and milky one. This is a main flavor and CANNOT be omitted or substituted, of course.

CAP Vanilla Custard: Yes, I understand that this flavoring is in a ton of my recipes, and I understand it contains Diketones, and I understand many people are trying to avoid Diketones, but it's so damn useful in desserts and bakeries. This flavoring is used, EXACTLY how it's used in many of my other recipes. To bring together all the other ingredients, and allow them all to "stick" to eachother. The "egg" inside this flavoring does that, though we don't want too much egg so using at a low 2% is just enough to gain it's qualities and some flavor profile, while not being too overpowering. Plus that thick rich vanilla inside it really helps make that "ice cream" separate from the cereal.

FA Meringue / Marshmallow: These flavorings both at 1% really round out that custard and take away the egg that is in it. This allows for more of an "Ice Cream" flavor rather than an eggy custard. It smooths out that richness, gives it that white sugar that is much needed, and helps create that authenticity. Authenticity is key here.

TFA Bavarian Cream: This flavoring is the secret weapon. We need it to "fry" the entire mix and add that almost carmelized cereal note, something that Cereal Crunch just doesn't have by itself. By "frying" this entire mix we start to really hone in that delicious crispy "batter" note that is in the IRL version. 1% is all that is needed to do that, while not giving too much of it's actual flavor to the mix.

TFA Strawberry (Ripe): This flavoring is used to accentuate that "milky" flavor. The cream content we get from Ripe, is PERFECT for this recipe and also adds in the "white sugar" that covers the frosted flakes. We do not want ANY of it's strawberry flavor, so using it at 3% allows it to give us everything we need, but also allow it to be overpowered so we don't taste the strawberry. This is a light flavoring to begin with, so we need to keep it low enough for that Crunch Cereal to crunch it out.

TFA Strawberry Ripe / FLV Strawberry: These two together create an EXCELLENT Strawberry cream type flavor. Like the strawberry ovaltine, creamy, malty, strawberry syrup type shit. The exact concentrations are NOT LOCKED DOWN. I'm still playing around with these ratios, and also playing with another strawberry to really get that strawberry to blend in with a cream. This is the main draw of a strawberry milk type flavor, how well it blends with the cream. Most strawberry creams miss this mark, and are often to artificial, to contrasting, or too hidden. But right now Ripe at 3% and FLV at 1% has been a nice fit with the rest of the creams involved

CAP Vanilla Bean Ice Cream: The reason I'm using CAP's version over TFA's because it is much more milkier and smooth. TFA's version just has too much AP, and doesn't taste like the MILK that I want. At 5% you really get this creamy milky goodness that comes with this flavoring and it really does well against that strawberry base.

FA Meringue: Of course you can't have a strawberry cream or milk without this flavoring. It just adds that sweet, airy, creaminess that is MUCH needed in any straw/cream. It's a perfect fit and a vital ingredient. We are using it here at 0.5% because you don't need much of it to really allow it to come out. We only want it's sweetness and airiness and we don't want it's "egg" content to come out too much...something is happening with this flavoring.

CAP Vanilla Custard: Welp here we are again. Using VC to bring out the kind of mouthfeel we need. Now, there probably is a BETTER way to incorporate weight on the palate without using this diketone heavy flavoring, but it does work so well. 2% again is perfect to really allow all the flavorings to stick together and add a touch of volume. Working against the airiness of Meringue, and with the weight of VBIC.

FW Hazelnut: The secret weapon in any cream. It adds a perfect creamy malt note and is the signature flavor profile in straight dairy or milk. It's that simple. 1% is all you need to bring that note out. If you want more of a milk flavor, increase to 1.5-2% bu be sure to watch your other creams.