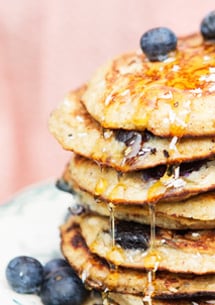 Top of New York (American Mornings): Banana Pancakes Drizzled with Maple Syrup, Topped Off with Blueberries, and Sprinkled with Cinnamon

This is a delicious and hearty vape. Great in the morning with a strong cup of coffee, and a muffin. You get a banana pancake through out the entire vape, with a light whipped cream on the inhale, and then a nice rich syrup on the exhale with notes of wild blueberries. Thick, flavorful, and warm.

TFA Banana Nut Bread / FA Cookie: The Banana NB obviously gives the nutty banana flavor. This is essential to the heart of the mix, and TFA did a great job on this flavoring. I used this at 5% because I needed every aspect of the flavor to come in, but also keep it light enough to allow all the other flavorings to come in. FA Cookie adds to the depth of the pancake, and also gives the pancakes more volume, which was lacking with BNB alone. Also, the BNB flavor has tiny notes of cinnamon, so no other flavoring is needed to give that sprinkle of cinnamon flavor. Although, it's very light. So if you like a lot more cinnamon, look at FA Catalan Cream to add in.

FA Bilberry: The bilberry gives notes of blueberry, and can even be dropped down to 0.25% to further make the banana pancake the star. It's an extremely potent flavoring, so not much is needed at all, and since we're making this an accent flavor, we need to really tone it down. FA Bilberry is an excellent flavoring and is almost SPOT ON to its original counterpart. So giving a realistic blueberry flavor is easy with this flavoring.

FA Caramel / Almond / TFA Brown Sugar: This makes that maple syrup flavor. These flavors, at these specific percentages, give a nice fresh and sticky maple syrup type flavor. The FA Almond really brings some extra character to it as well, while also adding to the complexity of the pancakes. All these flavorings also give a perfect sweetness to the entire mix. Adding that nice brown sugar note, as opposed to an artificial white sugar.

CAP Vanilla Custard: This just adds a nice buttery note to everything. One of my favorite things in the world is throwing on a nice fat slab of rich butter on top of my hot pancakes in the morning, so to emulate that I opted for VC as it does that extremely well. Also it doesn't take anything away from the flavor, as sometimes VC will do, so stick with the percentage here and you should be good to go.